Home » About » News » Virtual May Morning from the Great Tower

Virtual May Morning from the Great Tower 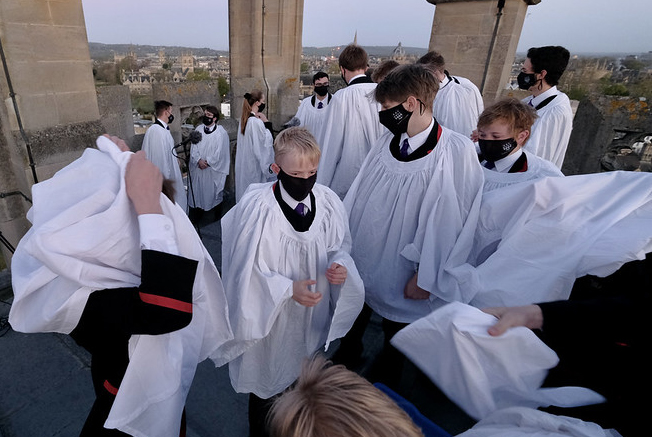 ***Please note that the Choir will not sing from the Tower in person on 1st May, and that, in line with current guidance, crowds should not gather***

The May Day celebrations may well have been cancelled again, but the Choir of Magdalen College is determined to build on the success of last year with another virtual May Morning performance, this time from the top of the Great Tower.

The members of the Choir sang from their homes via video link in 2020, but this year, the Choristers and Academical Clerks were able to climb the 172 steps to the top of one of Oxford’s most famous landmarks to welcome spring a few days earlier than usual.

Directed by Mark Williams, Informator Choristarum at Magdalen College, the Choir recorded the traditional Latin hymn, prayer, and madrigals at the top of the Tower to an unsuspecting Oxford at dawn last week.

“As soon as it became clear that we could do it safely and within the guidelines,” said Mark, “we knew that we wanted to record this year’s May Morning from the Tower. The Choir was sworn to secrecy, as we couldn’t risk people finding out, in case we drew a crowd; it’s been Oxford’s best kept secret. I suspect some early morning joggers got quite a surprise!

“May Morning is one of the highlights for members of the Choir, and it was wonderful to be able to sing at the top of the Tower once again this year. The atmosphere was very different without the crowds in the streets below, but as we sang in the dawn light, we all had a real sense of what a privilege it is to be part of this unique tradition. We are delighted to be able to share it once again this year with the Magdalen community – and with thousands of others around the world – continuing a truly magical custom dating back over 500 years.”

You can watch the premiere of this very special May Morning performance from just before 6am on Saturday 1 May on the Choir’s YouTube and Facebook pages.

About the Choir of Magdalen College

The precise origins of May Morning are uncertain but the tradition is thought to date back to at least 1509, when the College tower was completed. Over the centuries the nature of the event has taken several forms, ranging from a solemn Requiem in memory of King Henry VII, via a lengthy celebration involving bands of musicians, to the event as we know it today, which evolved in the mid 19th century, thanks to the historian John Bloxam, Bursar, Dean and Librarian of Magdalen. He introduced the singing of the Hymnus Eucharisticus, which was composed in the 17th century by Benjamin Rogers, Informator Choristarum and Fellow of Magdalen. The event is famously captured in a painting from 1890 by William Holman Hunt, entitled ‘May Morning on Magdalen Tower’. Last year’s ‘Virtual May Morning’ performance has had almost 200,000 views so far.