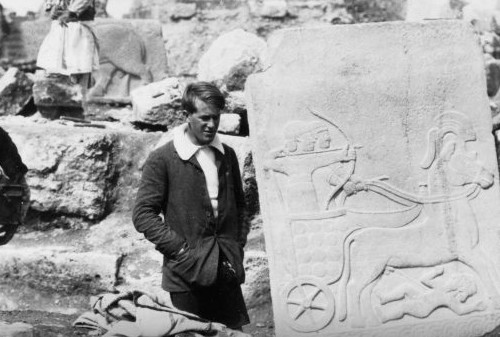 Over the next three years, Dr Lucy Smith will be cataloguing the archive of Jeremy Wilson (1944-2017), the authorised biographer of T.E. Lawrence (1888-1935, Senior Demy 1911-1914). Lucy joined Magdalen College as the Wilson Project Archivist this month.

As Wilson was a dedicated and pre-eminent Lawrence scholar over a fifty-year period, the acquisition of his research papers should prove an invaluable resource to scholars of Lawrence, and a substantial addition to the growing Lawrence collections at Magdalen. Wilson had unprecedented access to Lawrence’s material, having worked closely with Lawrence’s literary executor, his brother A.W. Lawrence. He also founded the Castle Hill Press with his wife Nicole, which published new editions of Lawrence’s literary works, and was strongly involved with the T.E. Lawrence Society.

The archive, acquired from Wilson’s wife, Nicole, comprises over 80 boxes of material, including research papers, lecture materials, photographs, audio-visual material, and facsimile copies of many of Lawrence’s works.

This significant archive promises to provide fascinating insights, not only into the life of Lawrence of Arabia, but also into the work of an eminent biographer.

Due to current circumstances, Lucy will be initially working away from Oxford on the research phase of the project. She will be cataloguing the Wilson archive over the next three years, which is planned to culminate in research and outreach activities at Magdalen in 2023