Home » The Life and Library of Arthur Throckmorton

The Life and Library of Arthur Throckmorton 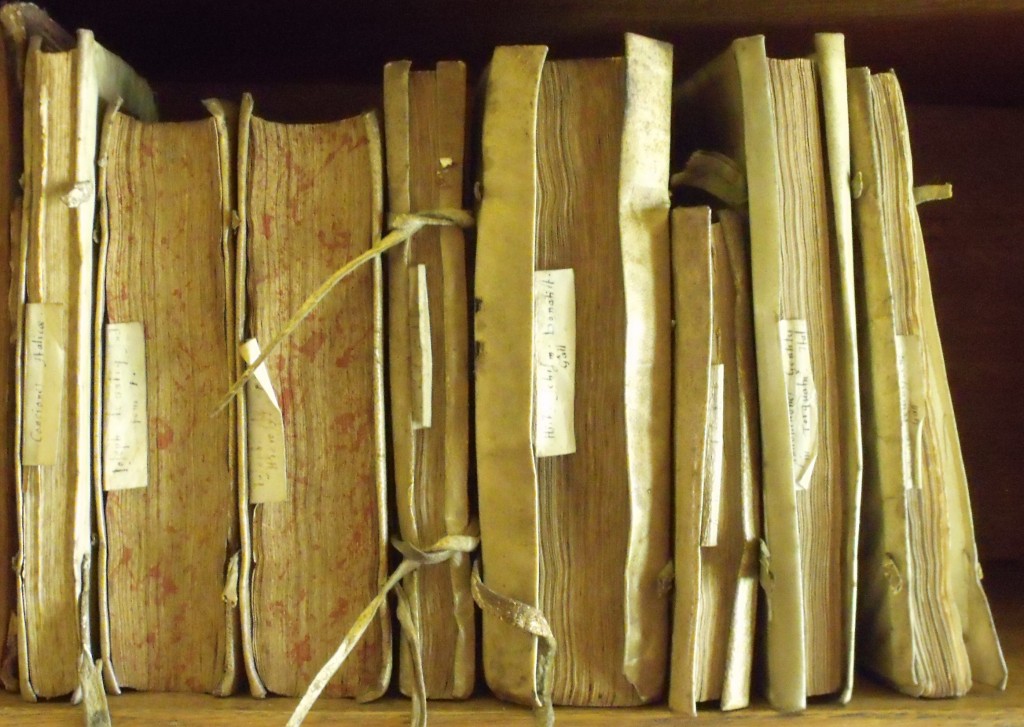 Magdalen College Old Library contains within it several exceptionally interesting collections, personal libraries of fascinating historical figures. The John Goodyer collection of botanical books is one of the finest 17th-century botanical libraries to survive, and it perfectly illustrates Goodyer’s knowledge and interest in all things botanical. The collection of John Fitzwilliam, in contrast, seems the typical library of a well-educated but non-focused book collector, but with a bit of digging it reveals insights into aspects of his personality such as his loyalty to James II and his literary connections. Sir Arthur Throckmorton’s library is similar to John Fitzwilliam’s, a broad collection covering many subjects, which serves to illustrate the life and interests of a 16th-century courtier and adventurer.

Sir Arthur Throckmorton (c.1557–1626) left Magdalen his entire library, except whichever English books his wife Anna wanted. Unfortunately for Magdalen, she evidently wanted all of them, including his Shakespeare quartos. This means that the college only received his foreign books and manuscripts. The collection is also far stronger in the vernacular than in the classical languages, which suggests that possibly Magdalen only kept books which weren’t duplicating items already held. Today the Old Library holds around 230 of Throckmorton’s books, in French, Italian, Latin, and Spanish; covering topics such as Christianity (including four Bibles: a manuscript of the Vulgate, two Italian translations, and a Polyglot), the Reformation, law, classics, vernacular literature, linguistics, history, geography and travel, political theory, geology, fencing, and an excellent astronomy collection. Many of the books are in very plain vellum bindings, as shown above, small portable books with their titles written on tabs.

Sir Arthur was the son of Sir Nicholas Throckmorton (c.1515–1571), a somewhat Machiavellian late Tudor courtier. Sir Nicholas was a cousin of Catherine Parr, Henry VIII’s last wife, and was a page to Henry’s bastard son the Duke of Richmond. He was in favour during the reign of King Edward VI, sitting in Parliament for Maldon and then Devizes, and was responsible for bringing King Edward the news of the English victory against the Scots at the Battle of Pinkie. He soon rose in status, becoming a member of Edward’s Privy Chamber and a knight. He was an enthusiastic Protestant, unlike most of his family, which brought him into conflict with Mary after Edward’s death. He also suffered somewhat by accusations that he sided with Lady Jane Grey and with Wyatt’s rebellion, which forced him to flee oversees. Whilst abroad he spied on the French and fed information back to England via the ambassador, which eventually led to his pardon and return. After Elizabeth became Queen he was once more in royal favour, although he was out-manoeuvred by Cecil and removed from court by being made the ambassador to France. In France he sought to aid the Huguenots, was imprisoned several times by the suspicious French court, and became a friend of Mary Queen of Scots. Sir Nicholas’ books probably passed to Arthur along with the majority of his estate, and were the original core of Arthur’s library collection. The book shown above has an ‘NT’ monogram on the title page which is believed to be that of Sir Nicholas, and a French history of England and Brittany would have been of obvious interest to an English ambassador in France.

Sir Nicholas’s second son (and heir) was Sir Arthur Throckmorton. Arthur matriculated at Magdalen in 1571 at the age of fourteen, where he later said he ‘was sometime a too much careless and negligent student’, and then proceeded to the Inns of Court. In 1576–7 he traveled abroad with the ambassador to France Sir Amyas Paulet, a fitting journey for a child of Sir Nicholas, where he perfected the French tongue. In 1578, aged about 21, he went to war, serving in the Netherlands under Black John Norris. He returned to England, and became a supporter of Edward de Vere, Earl of Oxford, during his fight with Philip Sidney regarding the Queen’s possible marriage to Francis, Duke of Anjou. He then went abroad again, on a grand continental tour from 1580–82. He traveled extensively in Holy Roman Empire and Italy, returning via France. It was during this tour that he probably collected the majority of his books which we now have: around 200 of his books that we hold were published on the continent before 1582, often on local history or geography, and his diaries record many books purchased. Some books also have buying notes inside them, such as the one in the history of the Este family (shown above) saying that he purchased it in Florence on the 23rd September 1581. We know that his diary that he was in Ferrara, seat of the Este family, the week before. He remained interested in the Este family even after his return to England, as his purchase of this book in 1587 shows.

He returned from his European trip with a solid grasp of Italian, having learned a fine book hand, and having developed interests which he would pursue for the rest of his life. One passion which he gained during his travels, possibly inspired by the comet which appeared over Europe in 1580, was a keen interest in astronomy. His diary is full of references to astronomical phenomena, and his library includes a first edition of Copernicus (shown above), four books by Tycho Brahe, and one by Giordano Bruno. The book above also shows his fine monogram, a far more flowing and elegant one than that of his father, possibly adopted after his lessons in Italy.

Arthur eventually returned from the continent and resumed his life at court. Although his Catholic cousins were involved in serious plots against the throne (including the ‘Throckmorton Plot’, which saw 3 of his cousins accused of planning to assassinate the Queen: one was executed whilst two fled into exile), Arthur occupied himself more in trying to find himself a wife. Although even that left him imprisoned: an attempted relationship with his cousin Lady Mary Darcy ended with Arthur thrown into Marshalsea prison for unkind words he had spoken to her about Robert Dudley, Earl of Leicester. He had more success with Anna Lucas, who he had first met in 1583 and finally serious courted and married in 1586. By all accounts theirs was a happy marriage. In 1588 he offered his services against the Spanish Armada (they were not required), and then bought a fine house at Mile End, for which we know he purchased new books and bookshelves. At the same time he became MP for Colchester with help from his father’s old friend and fellow spy, Sir Francis Walsingham. Unfortunately, just as Arthur’s career was on the rise, his sister Elizabeth ‘Bess’ Throckmorton (1565–c.1647), a lady-in-waiting to Queen Elizabeth, secretly married Sir Walter Raleigh without royal permission. Bess and Raleigh were sent to the Tower, and then banished from court, and the affair must have harmed Arthur’s status. But, as the Throckmortons tended to, he bounced back and, together with Sir Walter, won royal favour in the capture of Cadiz in 1596. The expedition returned laden down with spoils, which presumably included the book on seamanship shown above. This fabulous book has an original Spanish binding, and numerous hand-written notes on navigation by Joannes de Salcate (or Alçaste). Arthur Throckmorton didn’t just get interesting books as his prize for his part in the Cadiz Expedition: he also received a knighthood and 16 acres of land in Northampstonshire. He soon retired to that countryside estate, exchanging the busy life of court for that of the country gentleman.

The Throckmortons were frequently embroiled in plots and schemes, from Sir Nicholas prevaricating between Lady Jane Grey and Queen Mary to the Catholic Throckmorton Plot to assassinate Queen Elizabeth. This continued after Elizabeth’s death and James’ accession: Sir Arthur found himself the cousin of four of the Gunpowder Plot conspirators, and cousin to the wife of a fifth. Sir Arthur’s role in the Plot was on the side of King James: searching the houses of Catholics in Northamptonshire, including that of Robert Catesby. Sir Arthur was no fanatic, however he definitely aligned himself firmly with the Protestants, as would be expected from the son of Sir Nicholas and a student of President Humphrey’s Magdalen. His library includes several works by Luther, as well as a handful of examples of anti-papist propaganda such as the one shown above, possibly the last book which Sir Arthur added to his collection.

You may also like to read about the collections of John Fitzwilliam or John Goodyer, or to see our online exhibition: What can books tell us about their owners?