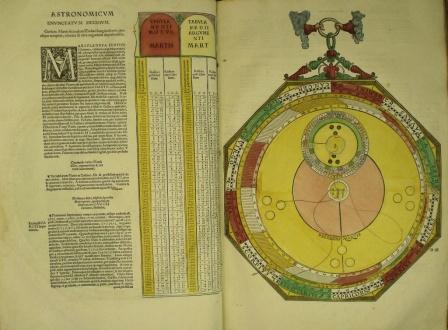 Magdalen College’s libraries contain collections of books that have been built up over centuries. As such they can be a tremendous resource for studying how ideas have changed and developed. This month’s treasure explores that, looking at Magdalen’s astronomy collection.

When the college was founded, the Aristotelian geocentric model of the universe, as expounded by Claudius Ptolemy (90–168), was preeminent. In this model, the Earth sat at the middle of the universe, heavy and stationary. It was surrounded by the planetary spheres, containing the Moon, Mercury, Venus, the Sun, Mars, Jupiter, Saturn, and the fixed stars. The planetary spheres moved in a complex system of rotations around rotations, which allowed highly accurate predictions of their future and past positions to be made. Ptolemy’s model was described in one of his three great books, originally called the Mathēmatikē Syntaxis, but which has become widely known by a name derived from its Arabic title: the Almagest. Magdalen’s copy is the first printed Greek edition.

Peter Apian (1495–1552), also known as Petrus Apianus, was a mathematician, astronomer and printer. His Astronomicum Cæsareum, so called because of its dedication to his patron Emperor Charles V, uses a series of wonderful paper models (or volvelles) of the Ptolemaic system, which could be rotated to predict a planet’s celestial latitude and longitude at any time and date. The image above, from Magdalen’s copy, shows how in Ptolemy’s model most planets moved around a small sphere (the epicycle) that in turn moved around a larger sphere (the deferent). This is similar to how we now see the Moon as orbiting the Earth and also following the Earth’s larger orbit around the Sun.

Ptolemy’s geocentric model was challenged by Nicolaus Copernicus (1473–1543). He proposed a heliocentric model, in which the Sun was the centre of a Solar System, orbited by the Earth, all the planets, and the fixed stars, with the Moon orbiting the Earth. Magdalen owns a copy of the first edition of Copernicus’ De revolutionibus, published on his deathbed.

Copernicus’ book proved useful for calculating the date of the Vernal Equinox and thus Easter, and so spread among some scholars. However, whilst it was a useful mathematic model, few people accepted it as being a true depiction of reality. Tycho Brahe (1546–1601) thought that Copernicus’ model “expertly and completely circumvents all that is superfluous or discordant in the system of Ptolemy… Yet it ascribes to the Earth, that hulking, lazy body, unfit for motion, a motion as quick as that of the aethereal torches, and a triple motion at that.” Brahe developed his own model, the Tychonic geo-heliocentric system, in which the planets all orbit the Sun, whilst the Moon, Sun and fixed stars orbit a stationary Earth. This model is shown above, an image from Magdalen’s first edition of Brahe’s key book.

During the hundred years after Copernicus’ death, the relative merits of the various models were much debated. Brahe’s apprentice and successor, Johannes Kepler (1571–1630), realised that the planets followed elliptical rather than circular orbits around the Sun, improving the accuracy of the Copernican system. His Epitome popularised his modified version of Copernicus’ theory. The Epitome was originally published in several parts, and Magdalen owns a later collected edition.

In 1610 Galileo Galilei (1564–1642) observed, using a newly invented telescope, that Venus exhibited a full set of phases, similar to the Moon, something impossible in the Ptolemaic model but explicable by the Copernican and Tychonic models. Galileo’s support for Copernicus’ system led him to clash with the Catholic Church, which in 1616 forbade teaching that the heliocentric system was anything other than a mathematical model, and placed De revolutionibus on the Index of Forbidden Books. In 1632 Galileo published a book, Dialogo sopra i due massimi sistemi del mondo, which argued the relative merits of the Ptolemaic and Copernican systems. The Catholic authorities felt that he did not give enough weight to the Ptolemaic model, placed his book on the Index, and kept Galileo under house arrest for the rest of his life. Magdalen’s copy is a Latin translation of the Italian original, published so that scholars across Europe could read his arguments.

Over the next hundred years the system proposed by Copernicus, with the changes by Kepler and Galileo, grew in popularity, especially after Isaac Newton (1642–1727) explained the theory of gravity and put the modified heliocentric model on a firm foundation in his Principia Mathematica. Magdalen owns a first edition of this key book, and the page above shows Newton discussing the structure of the Solar System.

However, eventually the heliocentric model was also disproved, as people came to realise that the Sun was just another star; that the Universe did not revolve around our Solar System; and eventually even the Newtonian theory of gravity was replaced by general relativity (books on which can be found at 530.11 in Magdalen College’s New Library). In the future, it is possible that general relativity too will be replaced by a theory that can reconcile it with quantum mechanics (530.12 in the New Library).

Many of the books shown above were discussed by Professor David Clary in the Magdalen College Library & Archives Talk of Michaelmas 2013, Science Books that Changed the World, alongside other works, including Newton’s Optics and Hooke’s Micrographia. Photos of all the books from Professor Clary’s talk are available on our Facebook page here.