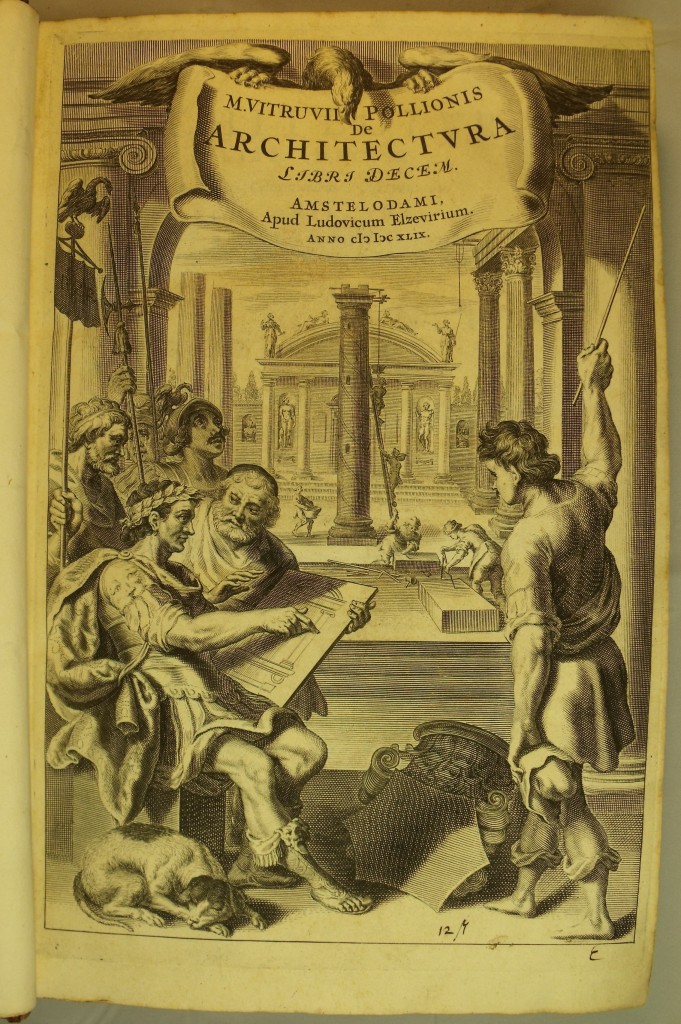 Magdalen College Libraries and Archives contain many architectural items, from large plate books containing scenes of Oxford (such as Loggan’s Oxonia illustrata and Williams’s Oxonia depicta), to the fantastic collection of architectural plans kept in the Archives, to the modern books on architecture shelved at 720 in the New Library. As we prepare for our New Library Redevelopment, we thought that we’d take the chance to look at some of the architectural highlights of the collection—starting this month with the books about architecture.

Marcus Vitruvius Pollio (1st century BC) was a Roman engineer and architect, who served as a military engineer under Julius Caesar. He is best known as the author of De architectura, the only major book on architecture to survive from Antiquity. Magdalen has four copies of Vitruvius, including the first full English translation (1771). This 1649 edition is Magdalen’s earliest architectural book. Its engraved title-page shows idealised Romans using Vitruvius’ designs to construct grand buildings, as inspiration for their 17th-century followers.

This copy was purchased with money donated by John Warner (1581–1666), Bishop of Rochester, who became a Demy at Magdalen in 1599, was elected a Fellow in 1604, and got his D.D. in 1616. He was a staunch Royalist whose property was sequestrated in 1643 but returned in the Restoration. He donated generously to the Library, and his portrait hangs above the door of the Old Library.

In the 15th century the Italian Renaissance led to a renewed appreciation of Classical architecture, inspired both by Vitruvius and by the ruins themselves. Several key works about architecture were written in the 16th century, and over the next century spread across Europe in various translations. Magdalen has a good collection of mid-17th-century architecture books, with multiple editions of Vitruvius, Palladio, Vignola and Scamozzi in Latin, French and English.

Giacomo Barozzi da Vignola (1507–73) was an Italian Renaissance architect, famous for constructing the Villa Farnese at Caprarola and the Jesuits’ Church of the Gesù in Rome. His Regola delli cinque ordini d’architettura is said to be the most published book in architectural history—our copy here is the first English translation. It clearly and systematically examines the five orders of architecture, and is extensively illustrated.

Whilst Vignola’s work was extensively published, it was his Venetian contemporary Andrea Palladio (1508–80) who defined Renaissance architecture. Although Palladio himself only worked in the Republic of Venice, particularly around Vicenza, his Neo-Classical designs spread thanks to his I quattro libri dell’architettura, first published in 1570.

Giacomo (or James) Leoni (1686–1746) probably did more than anyone else to introduce Palladio to the English landed classes. Leoni was born in Venice, but had moved to England by 1715, after which he set about promoting the designs of his favourite architects, Palladio, and his predecessor Leon Battista Alberti. The Architecture of A. Palladio was first published in parts between 1716 and 1720; it proved popular and came out in a number of later editions, including this second edition. He took liberties with Palladio, adapting some of his work to the tastes of his English audience, but that became part of Palladio’s (and Leoni’s) appeal.

Neo-Classical works such as Palladio and Vignola were clearly hugely influential in Magdalen, where Edward Holdsworth (1684–1746) had ambitious plans for a new Great Quadrangle modelled on a Palladian villa. Construction began on the North block in 1733, and that was the only part that ever got completed—we now know it as the New Building.

The two-volume Builder’s dictionary is a hands-on guide to architecture and construction. It is primarily an alphabetical dictionary of terminology, ideal for a gentleman wanting to understand his architect. It contains a lot of theoretical information on the art of architecture, drawn from Vitruvius and the key Renaissance writers. But it also contains a wealth of practical information on mathematics and on the practical use of various tools. The engraved frontispiece from the first volume shows 17th-century gentlemen inspecting an active building site. It also includes a quote from Pope’s epistle to Richard Boyle, 3rd Earl of Burlington, ‘the architect Earl’, who popularised the Palladian style in England for country houses and civil buildings. The second volume is open to the plate illustrating trigonometry.

This book was published just after work on Magdalen’s New Building was begun, and it is possible that it was purchased as soon as it was published. It is very tempting to imagine President Edward Butler (1686–1745) reading it as the building work proceeded…

Only the North block of Holdsworth’s Palladian quad was completed, and for almost a century it sat unfinished. As the 18th century drew on and the 19th century began, Gothic architecture came back into fashion, and various architects put forward plans on how to adapt and finish Holdsworth’s plans.

Humphry Repton (1752–1818) was a leading landscape designer and architect of the 18th century, often regarded as the successor to Capability Brown. He was famous for producing his ‘Red Books’ with their lift-up flaps to show before-and-after drawings, but unlike Capability Brown he did not oversee construction work himself. He produced one such ‘Red Book’ for Magdalen (kept in the Archive at MC:FA16/4/1AD/1), in which he suggested turning the New Building into a three-sided quad, putting a Gothic facade on it, and flooding the meadow surrounded by Addison’s Walk to create a boating lake beyond.

As well as the ‘Red Books’ produced for individual clients, Repton published three books using ideas and extracts from his ‘Red Books’. This is his second published book and contains a discussion of Gothic and Neo-Classical architecture extracted from the Red Book of Magdalen College—but Magdalen’s drawings were not reproduced as they were ‘on a scale too large for this work’. As this page of gatehouses shows, Repton was equally comfortable working with Gothic and Neo-Classical architecture.

Similarly Magdalen ended up with a fascinating mix of Gothic and Neo-Classical buildings, with the Palladian New Building facing the Gothic Cloisters, along with the 19th- and early-20th-century Neo-Gothic additions of the President’s Lodgings, St. Swithun’s Quad and Longwall Quad. Magdalen has beautiful examples of the most popular architectural styles from throughout history, and hopefully the New Library Redevelopment will add a contemporary feel to the New Library that will similarly serve as an exemplar in the future. The redevelopment will also enable people to appreciate the original 19th-century Gothic interior of the building better, by regaining the original height of the interior space and letting people get closer to the fabulous Gothic rafters.