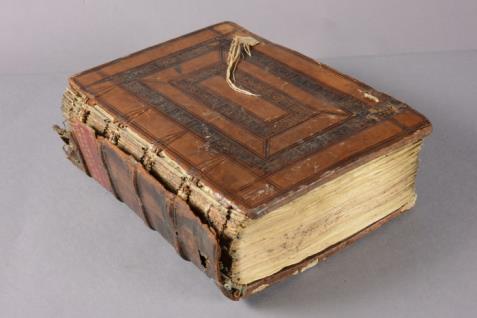 Magdalen’s collection of 17 Greek manuscripts is, as a whole, nationally important for its Byzantine integrity as well as for its intriguing provenance. In 2007, the Oxford Conservation Consortium surveyed the collection and together with Magdalen’s former Fellow Librarian, Dr Christine Ferdinand, prioritised its conservation treatment. Since 2007, 14 manuscripts have been treated (amongst other conservation projects for the college), many requiring in situ repair of the text-block or binding. Towards the end of the project came the three most damaged manuscripts, and the most challenging from a conservation point of view. Manuscripts 1, 3 and 5  are eleventh-century manuscripts with major structural damage – breaks in the sewing, deterioration/loss of the leather sewing supports, loss and damage to the leather covering — making them unsafe to produce for researchers or for display. We are grateful to the National Manuscripts Conservation Trust and the Marc Fitch Fund for their support of the conservation treatment of these three manuscripts.

A further consideration in discussions about treatment was the fact that the manuscripts were in significant Oxford bindings; their conservation had to take into account important recorded early seventeenth-century bindings. MS GR 1 has a typed note dated 19 August 1947 from Neil Ker to Magdalen’s librarian Charles Talbot Onions, saying that he had looked at MS GR 1 and determined that it was closely related to MS GR 3 and 5 in its decoration, and that the binder’s roll was number XII in Strickland Gibson’s Early Oxford Bindings.

Greek manuscripts of the Byzantine period are primary source material for the study of classical, biblical and patristic texts; they are also essential evidence for the cultural history of Byzantium. The three manuscripts contain Homilies and Commentaries by the eminent church fathers John Chrysostom (349-407) and Gregory of Nazianzus (329-390). It is not known how or when the Greek manuscripts came to Magdalen College; it may be they were given to the college library in the fifteenth or sixteenth century when other Oxford colleges, notably Corpus Christi College, began to teach Greek to their students.

Three treatment options were considered for these manuscripts, first leaving them alone, second resewing in situ, reattaching boards and rebacking, and third resewing, reattaching boards and rebacking. The first option would not improve access to the manuscripts as they would remain too fragile to be used and their condition would only worsen. Option two could stabilize the current structure but was an unacceptable compromise as it did not address the major structural problems, i.e. inflexible broken tanned supports, weak board attachment and no board leverage, contraction along the spinefolds causing abrasion/damage to the leaves and pigments, damage to first/last leaves caused by lack of protective endleaves, etc. Under this second option, the volumes may have been made more accessible for use and display, but further breakdown of the structure would be inevitable due to inherent problems with materials (stiff acidic tanned supports) and structure (lack of endleaves, no ‘flow’ on opening the volume so a ‘barn door’ action to the boards). The third option was chosen as it addressed both text-block and binding problems and would provide a new binding incorporating important elements from the Oxford binding (blind-tooled boards, spine covering). This option, of dismantling and resewing the text-block, would create a new structure which is sympathetic to the text giving flexibility, good opening properties, and better access to the manuscripts for the future. The decision was also taken to digitise all three manuscripts when disbound, to provide a digital copy for researchers and as a preservation measure.

Dismantling the bindings and careful recording of the structures revealed interesting features of the earlier Byzantine bindings, such as V-nicks made in preparation for sewing, quire tackets, and early parchment repairs. The original layout of the sewing stations (points at which the sewing thread enters/exits the quires) was also noted and in the case of MSS 1 and 5, unused cuts were present that may be preliminary lay-out marks by the binder. The binder may have marked out the sewing stations with initial straight knife cuts, then gone back to recut the larger V-nicks after rechecking the position of the sewing stations. In the case of MS GR 1, it may be that the binder decided to reposition the two outermost sewing stations and cut new V-nicks, leaving the two slits unused. There was no evidence of the slits having been used or thread having been through them in MS GR 1, however MS GR 5 showed evidence of the slits having been used for sewing, as they were enlarged and distorted.

Quires 2, 9 and 17 of MS GR 1 had quire tackets in place at the tail.  These small loops of thread were used to hold together the individual bifolia within the gathering, as the manuscript was being written. In this case these were one-hole tackets, with a thread passing through a single hole in the fold of the quire and over the tail edge to form a loop.

In MS GR 5, all the quires presented spinefold repairs to the leaves, predating the seventeenth-century binding. Most of the repairs were located close to both the head and tail; sometimes only either the head or the tail and in a few instances a long strip was used to repair all along the spinefold. In all cases, the outer bifolium of the quire had been repaired on the outside of the spinefold, but this varies for the other bifolia, with repairs on either the inside or outside. In some cases, for more damaged areas the repair parchment had been applied on both sides of the fold. The material used for the repairs was predominantly sheepskin, as shown by non-destructive analysis done by CodeX  https://www.york.ac.uk/archaeology/research/current-projects/codex/. The damaged areas of the spinefolds had been neatly trimmed before the parchment repair strip was adhered even though the brownish adhesive was often visibly smudged around the repair. In a very few cases the damaged spinefold was left unrepaired and revealed rodent activity and overstitching of the damaged area.

These parchment spinefold repairs had been prepared for an unsupported Byzantine-style binding, as they had the characteristic V cuts, therefore we can assume that the repairs were made before the seventeenth-century Oxford binding and that this manuscript had at least two Byzantine bindings before its Western one. The Oxford binder (one assumes) was responsible for mixing the order of the quires, and rebinding the text in the wrong order. The original Greek numbering was visible at lower/tail margin both at the beginning and the end of most quires, but may not have been easy for an English binder to follow.

MSS GR 1 and 5 have been resewn and are ready to have their boards reattached and spine leather put back in place; the work on MS GR 3 is just starting. This early eleventh-century Chrysostom commentary on Genesis is internationally significant for its unusual additions. This manuscript was used as a model book by three Cypriot artists, who copied iconic images into the book’s wide margins in the 12th and 13th centuries. As has been suggested, the Oxford drawings in MS GR 3 offer the additional advantage of substantially enlarging our knowledge of the much-hypothesised Byzantine “Musterbuch”.

These three eleventh-century manuscripts are individually important as primary source material for the study of classical, biblical and patristic texts, and the cultural history of Byzantium. A new catalogue of Magdalen’s 17 Greek manuscript is being prepared by Mr Nigel Wilson, and the conservation treatment coincides, to preserve them for the future.

I am grateful to George Boudalis for suggestions about the use/meaning of the straight knife cuts. Private communication, George Boudalis, November 2015.