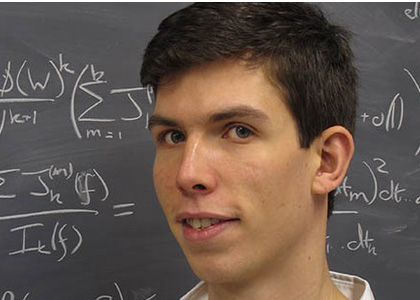 Professor James Maynard, a former Fellow by Examination at Magdalen, has been named one of four recipients of this year’s Fields Medal.

The Fields Medal is awarded every four years on the occasion of the International Congress of Mathematicians to recognise outstanding mathematical achievement for existing work and the promise of future achievement. It is the most prestigious award in mathematics for those under 40.

James was awarded the Medal for his contributions to analytic number theory, which have led to advances in understanding the structure of prime numbers and in Diophantine approximation, which deals with the approximation of real numbers by rational numbers.

James came to Magdalen in 2014 as a Fellow by Examination (Junior Research Fellow), and became a Professor of Number Theory at Oxford in 2017. James is one of the leading figures in the field of number theory. His research focuses on some of the most famous questions in number theory, particularly around the distribution and structure of prime numbers.