Home » William Holman Hunt and May Morning at Magdalen College

William Holman Hunt and May Morning at Magdalen College 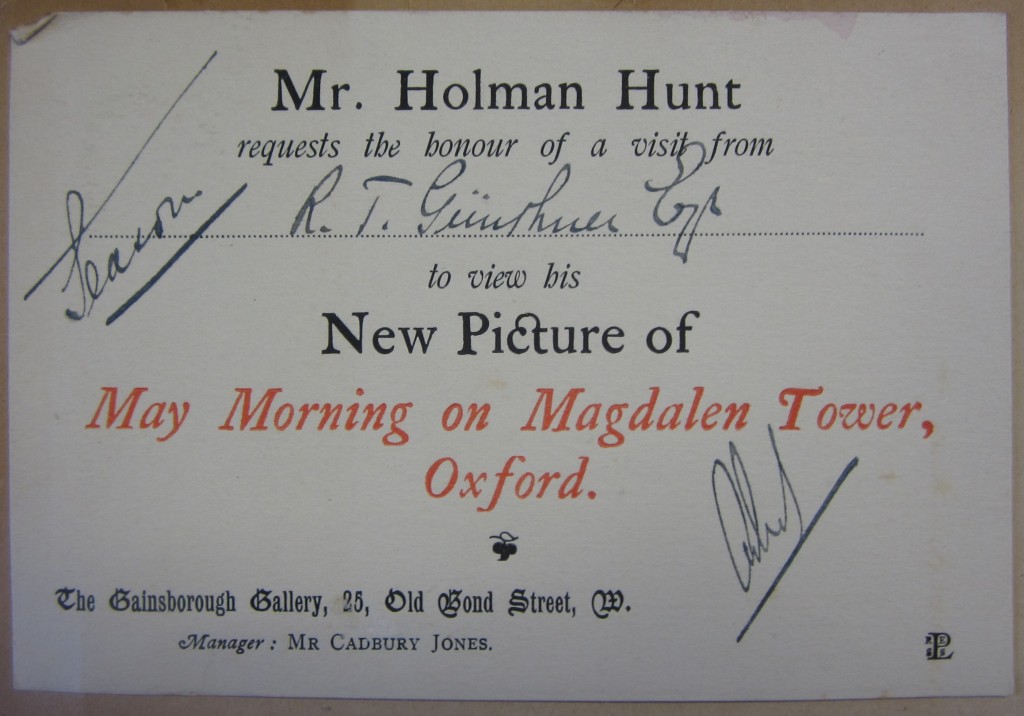 Tomorrow, at 6.00 am on May Morning, as they have done for many hundreds of years, the Choir of Magdalen College will climb our Tower and sing from the top of it. The origins of this ceremony remain obscure, but it has become a highlight of the Oxford calendar.

Perhaps the most famous evocation of this event is the painting “May Morning on Magdalen Tower”, created in 1888–90 by the great Pre-Raphaelite artist William Holman Hunt (1827–1910). There are two versions of this work, a larger one housed at the Lady Lever Art Gallery in Port Sunlight, and a smaller one housed in Birmingham Museum and Art Gallery.

Magdalen’s archives include several documents relating to Holman Hunt’s masterpiece, in particular this letter written in September 1888 from the artist to John Varley Roberts, our then Organist, in which he discusses his progress on the work.

Here is a transcription of the letter:

“I am extremely grateful to you for your kind attention to my last letter, and for the perfect drawing giving the plan of Magdalen tower with the singing company all arranged in order which Mr. Churms [one of Magdalen’s lay clerks] has most obligingly had prepared for me; with this complete authority I shall now feel quite strong, and it will be possible for me henceforth to have thorough knowledge in arranging my groups where I am taking artistic licence in departing from the strict law of the ceremony which in some cases I shall of course have to do.

“I shall not be quite ready to come to Oxford by the 25th inst, but as soon after as possible I shall appear with my large as well as the small canvas and then I fear that I may be very troublesome to you and all of my good friends in Oxford.

“With kind regards I am

Hunt took pains to include Magdalen figures on his painting. On the left hand side can just be seen the burly bearded figure of Dr. Roberts conducting the choir. On the right hand side the back row of the singers comprise several Magdalen worthies, including, from left to right, the Professor of Physiology, John Burdon Sanderson (Fellow 1882–94), the Professor of Music, Sir John Stainer (Organist 1860–72), the theologian Henry Bramley (Fellow 1857–1905), John Bloxam (Fellow 1835–62), and Herbert Warren (President 1885–1928). To Warren’s left is a Parsee priest, a slightly unexpected appearance, and just behind him is Sir Walter Parratt (Organist 1872–82).

The Parsee priest was not Hunt’s only piece of “artistic licence”. Back in the 1830s, John Bloxam had effectively recreated May Morning in its current form by making the choristers wear surplices, and had devoted his life to exploring the history of Magdalen. By now Bloxam was in his early eighties and in frail health (he would die in 1891), and his Tower-climbing days were long past, but Hunt clearly wished to do him honour by spiriting him up the Tower for one last time.

Bloxam did manage at least to see the painting, as revealed in this letter of December 1889:

“I have had lately a very nice letter from the Countess of Winchelsea, herself a good artist, who has paid a visit to Mr. H. Hunt’s studio – and has sent me her impressions of the Painting which are very favourable. I saw it in September, when not quite finished.”

Bloxam carefully does not reveal his own opinion of the painting!

When the picture was finished, Hunt put it on show in a London gallery, and invited people from Magdalen to come and see it. This invitation was issued to Robert Gunther, a young science Demy at Magdalen who would later become a Fellow here.

An explanatory leaflet was prepared, which included a price list for anyone wishing to order a print of the painting. Hunt may have been a great visionary, but he was also businessman enough to hope to make some money out of loyal members of Magdalen.