Home » The Nuremberg Chronicle: A History of the World

The Nuremberg Chronicle: A History of the World 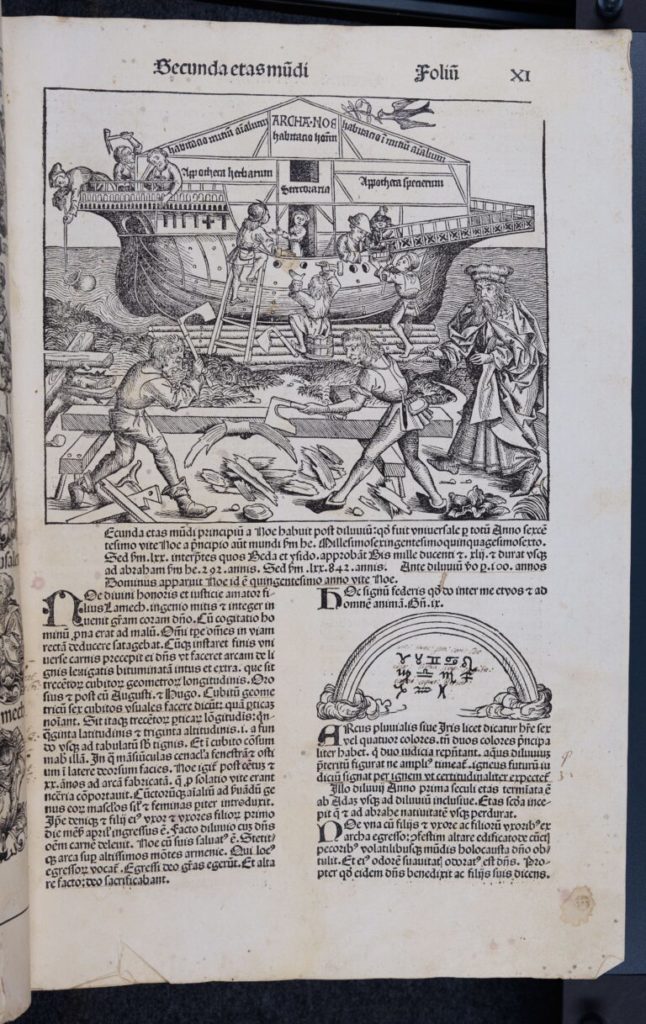 The Nuremberg Chronicle is for good reason one of the most well-known incunabula in existence. Produced by the esteemed printer Anton Koberger (1440?-1513) and compiled by the humanist Hartmann Schedel (1440-1514), this world history is unique in the history of the book. To aid its depiction of the seven stages of Biblical history, more than 1800 woodcut illustrations were used in its pages.  Both the sheer number of these illustrations and its large print run made the chronicle unprecedented upon publication and have ensured that it has continued to be studied ever since. Indeed, it has been aptly described as ‘the largest printing enterprise of the entire incunable period’ (Posselt, 2015: p.117).

Magdalen’s copy of this influential text (Arch.B.III.4.8) is a first edition from 1493. Although the text was later printed with a German translation, the Magdalen copy is written in the original Latin. This makes it one of around 1,300 Latin copies that have survived to the present day (Wagner, 2015: p.8). As the reader turns the pages of the text, the beautiful woodcut illustrations clearly show why such a large number of these books have been preserved in libraries, archives, and special collections the world over.

An example of these illustrations in the Magdalen copy can be seen above. Taken from the first part of the text that narrates early biblical history, here you can see a scene in the Garden of Eden. Adam and Eve are depicted on the right-hand side and are stood on either side of the tree of knowledge. Wrapped around the tree is the infamous serpent, offering the forbidden fruit to Eve. A couple of pages later, another striking biblical image is included depicting Noah’s famous ark (pictured below). In this image, the ark is still being constructed, but the reader can clearly see various parts of the entire biblical story such as the dove and olive branch above the ark and the rainbow below.

These beautiful images, along with all images in the Nuremberg Chronicle, were printed using woodcut engravings. Although many woodcuts are repeated throughout the chronicle, over 650 original woodcuts had to be created (Posselt, 2015: p.117). Each of these woodcuts was created by two Nuremberg artists, Michael Wolgemut (1434-1519) and Wilhelm Pleydenwurff (1460-14??), and had to be painstakingly hand-crafted. The extensive use of these woodcut images in this text and their prominent location within the text block revolutionised book production in Europe. Indeed, it has been argued that this text ‘established new technical standards regarding complexity of layout’ (Green, 2008: p.115).

Biblical images, however, are not the only striking images to appear in the text. As Green (2008) points out, the Nuremberg Chronicle ‘also features extensive geographical and cultural information on several regions’ (p. 115), focusing on Germany and Italy. This information appears throughout the text, and is particularly detailed for many cities in central Europe. Perhaps not surprisingly, the city of Nuremberg itself receives much attention. Below, you can see a double-page woodcut illustration of the city that accompanies an extensive history of the city.

Interestingly, several cities in the German-speaking Holy Roman Empire are depicted as equal to the classical Italian cities further to the South, such as Rome and Florence. Indeed, this was one of the main objectives of the text. Heavily influenced by the Renaissance humanism originating in Italy in this period, the Nuremberg Chronicle aimed to depict German-speaking Europe as of ‘equal importance’ to classical Italy (Posselt, 2015: p.120). In comparison, other parts of Western Europe, such as England, receive little attention. Below, you can see the page that depicts the British Isles. The river in the illustration is probably the Thames, denoting that the city is London. This page, however, does not purely focus on the history of the British capital. Instead, it includes information about all of England (Anglia), Scotland (Scocia), and Ireland (Hibernia).

The Magdalen copy of the Nuremberg Chronicle first came to the college in 1626 as part of Arthur Throckmorton’s generous donation. Arthur Throckmorton, the son of an influential late Tudor courtier, had travelled widely throughout Europe, collecting over 200 books. On his death, he left Magdalen his entire library, except for any English books that his wife Anna wanted (see this previous article on his library for more information). Luckily for Magdalen, this Latin copy of the Nuremberg chronicle was passed to the library and has remained with the college ever since. Throckmorton signed his name on the title page and the work includes manuscript notes in the margins throughout, which are presumably his own.

Unfortunately, however, the text of this copy has not survived completely to the present day. Leaves CCLVIIII-CCLX are missing and three of the unnumbered leaves have also been removed. The reasons behind this are unclear. The book may have already been damaged when Throckmorton acquired it, or subsequently damaged whilst at Magdalen. Due to the striking illustrations, individual pages of the Nuremberg Chronicle had a high re-sale value, so readers may have taken pages to later sell. Likewise, pages may have been taken by readers if the illustrations were of a city with particular personal significance.

Additionally, this copy is interesting as it still retains chain marks on the top right of the front board. These marks can be seen in the picture above, and reflect the organisation of the Old Library during this period. As Christine Ferdinand (2014) points out, after 1610 books ‘were shelved with the fore-edge (not the spine) of the book showing, and chained from the top edge of the front cover to metal bars running along the shelves’. The college was so fond of this method of securing its books that the system remained in place until 1799, making Magdalen the last Oxford college to unchain its books (Ferdinand, 2014).

Due to its age, beauty, and interesting history, Magdalen’s Nuremberg Chronicle remains a popular text in college and one that is consulted frequently. Indeed, it has become increasingly popular in teaching sessions in the Old Library. Such sessions give students the opportunity to get close to rare books and discuss their significance. Dr Raphaële Garrod, fellow of Magdalen College, regularly teaches with the Chronicle and finds it a very useful teaching tool. She writes:

“When it comes to firing up the students’s interest for the Renaissance as an age of discovery, you can’t beat the Nuremberg Chronicles. The book’s format itself is appealing: this is as close as you can get to a grimoire; it is large, unwieldy, still has traces of clasps on its cover, and its woodcut illustrations are marvels. Enclosed between the two phantasmagorical depictions of the biblical genesis and population of the world, and its Apocalyptic end, is the earliest Renaissance records of European world history and geography, and one of the most impressive too.

In the margins, Pliny’s monsters from faraway lands give way to the depiction of some of the great humanists of the time;  a dreamt-up map of Jerusalem sits happily not far off from accurate bird-eye views of Central European cities. Unearthing the Renaissance coherence of what we now experience as discontinuous types of sources, of evidence–the ancient text and the contemporary travel narrative, the tempo of biblical and historical time– is brought vividly alive by the Chronicles. It has helped me a lot in introducing my students to Montaigne’s patchwork writing in the Essais in the first year.”

It is clear, therefore, that Magdalen’s copy of the Nuremberg Chronicle will always be a particular highlight of the Old Library’s collection. In the first place, both its publishing success and its intricate use of text and image make it a key text in the history of the book in Europe. In its pages, the reader can fully sense the transition from the handwritten to the printed book and the possibilities that came with the newer and revolutionary technology. Likewise, the individuality of this copy and its long history means that it is not just significant due to its contents, but rather reveals the history and use of the Old Library to the modern reader. It will definitely remain a popular teaching tool in the Old Library for many years to come!

Posselt, B. The World Chronicle and Its Sources. In B. Wagner and D. Booton (Eds.). Worlds of Learning: The Library and World Chronicle of the Nuremberg Physician Hartmann Schedel (1440-1514). (Munich: Allitera Verlag, 2015).

Schedel, Hartmann, and Stephan Füssel. Chronicle of the World 1493 : The Complete Nuremberg Chronicle (2013).