Home » The Magdalen Papyrus P64: possibly the earliest known fragments of the New Testament (or of a book!)

The Magdalen Papyrus P64: possibly the earliest known fragments of the New Testament (or of a book!) 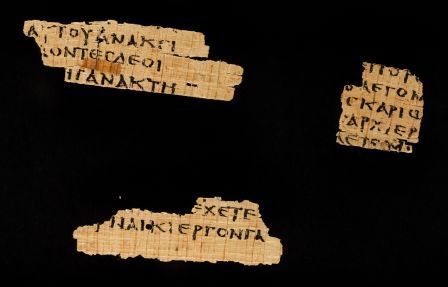 These three small papyrus fragments are Magd. MS. Gr. 17 (also known as Gregory-Aland P64, the ‘Magdalen Papyrus’ or the ‘Jesus Papyrus’), the oldest item held by Magdalen College Library. They probably date to the late second century AD, making them among the dozen earliest known surviving fragments of the New Testament. Along with the other early New Testament fragments they are the oldest known pieces of a codex (a book with pages, as opposed to a scroll).

We know that they are from a codex as the fragments have text from the same chapter on both sides—Matthew 26, the verses where Jesus’ head is anointed with perfume (to the disciples’ indignation) by a figure some identify as Mary Magdalene; Judas meets with the chief priests to betray Jesus; and the disciples share the Last Supper. By examining the surviving text and comparing it to the full text, we know that the codex originally had a two-column format, had around 16 letters per line and 35 lines per page, and was a little smaller than a modern paperback (Roberts estimates that the text block was 10.5 x 16.8 cm with the Gospel of Matthew covering around 150 pages, Head believes it was shorter at around 80 pages).

These fragments were given to Magdalen by Charles Bousfield Huleatt (1863–1908) in 1901. Huleatt was a Magdalen alumni turned missionary, who was working in Luxor. Sadly nothing is known as to how he acquired them, or their ultimate origin. He sent them to Magdalen as a curiosity, an ancient papyrus fragment feature the college’s namesake. Huleatt dated them to the third century; however in 1901 they were dated for the college by Dr. Hunt to the fourth century. Colin Roberts (1953) re-dated the fragments to the later second century, a date he confirmed with the experts Sir Harold Bell, Mr. T. C. Skeat, and Professor Turner.

Other fragments from the start of an early gospel of Matthew, known as P67 or the ‘Barcelona Papyrus’ (Barcelona, Abadia de Montserrat, P.Barc./Montserrat inv. 1) are widely believed to be from the same original codex, as argued in Roca-Puig (1962). Fragments of an early gospel of Luke, known as P4 (Paris, Bibliothèque Nationale, Suppl. Gr. 1120) and found used as binding material in a third century copy of Philo, have also occasionally been claimed to be part of the codex, such as by Skeat (1997). If P4 does come from the same codex as P64+67, then it could be the earliest surviving codex that contained all four gospels, as opposed to being a single-gospel codex. However current scholarship, such Head (2005) or the codicological analysis by Charlesworth (2007), seems to be leaning towards P4 being a separate item to P64+67. It was possibly written by the same scribe, or made at the same location.

Our fragments have always attracted scholarly attention, and shot to public fame on Christmas Eve 1994, when The Times reported that Carsten Peter Thiede had re-dated the fragments to the first century, providing ‘the first material evidence that the Gospel according to St Matthew is an eyewitness account written by contemporaries of Christ’. If Thiede was correct, they would be the oldest surviving text of the New Testament and pieces of a codex. Thiede’s claim, elaborated upon in 1995 in a scholarly article and a best-selling book (with Matthew d’Ancona), has prompted much discussion, however it has not been widely accepted by the academic community.

Today most scholars support Head (1995), and favour a dating to the late second century or c.200 A.D. This still makes our fragments among the earliest dozen surviving fragments of the gospels, and the oldest book in our collections by almost a thousand years.

Our ‘famous fragments’ appeared in our Michaelmas Term 2013 exhibition, ‘Magdalen Controversies’, along with a medieval life of Mary Magdalene claiming that she lived in France, Charles Darwin’s letter to Daubeny and many other interesting items from our collections. The exhibition is available online here.

There is a video featuring James Fishwick, our Reader Services Assistant Librarian, talking about these fragments here

The Magdalen Papyrus is said to be the most written about early biblical fragment. This bibliography is illustrative rather than exhaustive: