The Madness of Mr. Massingberd: Georgian Magdalen and Mental Health 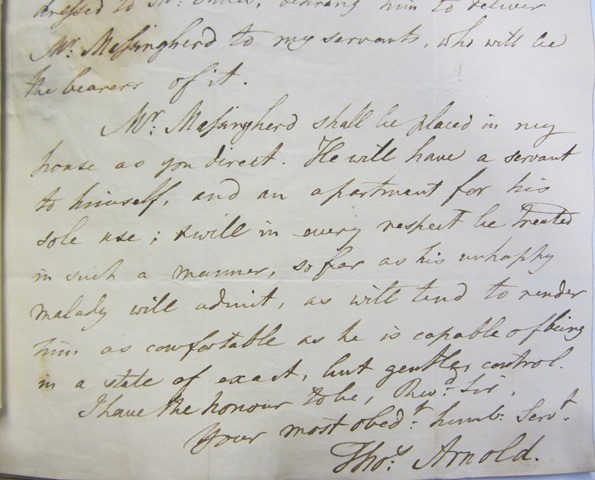 Our Archivist is currently engaged in a major project to catalogue the papers of Martin Routh, Magdalen’s President from 1791-1854. They survive because of a lucky chance: on Routh’s death, John Bloxam, Magdalen’s first major historian, gathered up all the papers he could find in the Lodgings, and so managed to preserve about 3000 letters to Routh, covering almost eight decades. Here is Routh himself, photographed on his 99th birthday in September 1854:

There will be many stories to be told from the Routh papers once the catalogue is finished, but as a taster, we devote this month’s Treasure to an exploration of a group of 22 letters and papers which reveal the sad story of Francis Massingberd, who was elected a Demy here in 1775 and then a Fellow in 1781.

Massingberd came from a family of Lincolnshire gentry, whose home was Gunby Hall (now owned by the National Trust). In 1784, he was appointed to the living of Bratoft and Gunby St. Peter. The latter church lies within the grounds of the Hall: evidently the family kept it for members who took holy orders. Here it is:

In theory, that should have been that: Massingberd would have lived near the family home, looking after the family church, in a world recognisable to readers of Jane Austen–until it all went terribly wrong.

Late in December 1791, Martin Routh received a letter from a friend of Massingberd’s in Lincolnshire reporting on his “unhappy situation”, and asking Routh to grant permission “send a proper Guard with him immediately to Dr. Willis’s at Gretford”.

Dr. Willis of Greatford was Francis Willis (1718–1807), a specialist in mental illness. Just a few years earlier, it was Willis who had been charged with looking after George III during his bout of insanity.

Here is a letter from Willis to Routh asking for his approval for the bearer to convey Massingberd to his hospital in Greatford. Willis says that the bearer “had the Care of Mr. Massingberd before”, which suggests that Massingberd had been unwell before.

Popular belief, not least thanks to dramatisations of George III’s insanity or depictions of the madhouse at Bethlem, would have it that the treatment of lunatics in Georgian England was harsh, with visions of straitjacketed people chained up in filthy cells. The truth was more complex. There were abuses, certainly, but by the 1790s a more humane approach to madness was taking root. Even Francis Willis, who did use a straitjacket on George III, allowed him a razor with which to shave himself, and visitors to Greatford were struck at the humane treatment given to patients there, and their clean and tidy appearance.

Massingberd did not stay with Willis long. For a while he seems to have been looked after by another doctor, Richard Budd (1746–1821), but without much success. In January 1796, Budd wrote to Routh: “at no time when I have visited him has he been in a sound state of mind .,. I think there’s too much reason to fear his complaint will be permanent.”

However, a few weeks later Massingberd was given to the care of Thomas Arnold (c. 1742–1816; no relation of the Headmaster of Rugby). Arnold, like Willis, had made his name as a specialist in the treatment of the insane, but he was known for taking a much more humane attitude towards his patients. This letter shows Arnold’s plans for Massingberd:

The second paragraph includes this passage: “He will have a servant to himself, and an apartment for his sole use; & will in every respect be treated in such a manner, as far as his unhappy malady will admit, as will tend to render him as comfortable as he is capable of being in a state of exact, but gentle, control.” In a later letter, Arnold reports that Massingberd is allowed to walk in the hospital’s garden, and is sleeping much better than he has for years.

Such treatment did not come cheaply. The Routh papers include this handbill for Arnold’s hospital:

Arnold had a sliding scale of treatment for his patients, according to their ability to pay. Several letters from Arnold to Routh show that the College was paying between £150 and £160 a year for Massingberd’s treatment, which suggests that he was put in the North Wing, paying 3 guineas a week. The College’s Digestion Books show that this money came from Massingberd’s stipend.

Nevertheless, Massingberd’s friends were anxious about whether he was in the best possible hands. One friend, Edward Brackenbury, writing in January 1801, passed on their concerns that “the circumstances of his situation under Dr. Arnold … are not quite so eligible & comfortable as his annual Income will allow”, and hoped that they could remove him to a private lodgings where he could be looked after. He was, however, writing this letter without having seen Massingberd for himself, and when he did a few weeks later, he was badly disappointed:

Having hoped “to find Him somewhat recovered that he might have been removed if expedient”, Brackenbury was “very sorry to say that there is no probability whatever of entertaining any such hopes”. He did, however, hope that the College might find the means to help pay more for his accommodation.

But what was wrong with Francis Massingberd? In January 1792, when Francis Willis first had a chance to examine him, he noted that he had “a fever which seems to affect his nerves, and makes him extremely irritable.” A fuller description comes from Thomas Arnold in April 1797:

“His Insanity appears to be very considerable, though not intense, & not always conspicuous. It is of that kind which I have denominated whimsical; and has discovered itself in such fancies as asking one of the servants whether he was not the devil”

Fortunately, Arnold set out his definition of “Whimsical Insanity” in his book Observations on the Nature, Kinds, Causes, and Prevention of Insanity, Lunacy, or Madness (Leicester 1782–6), volume I 199–204, as follows:

“In Whimsical Insanity, the patient is possessed with absurd and whimsical fancies … of which he is sometimes the sport of an endless variety; and is peculiarly apt to … to attribute very great, important, or extraordinary effects, to very little, insignificant, and altogether inadequate causes; or, on the contrary, to imagine causes of considerable, and even of vast extent, and magnitude, to account for the existence of things, circumstances, or events, comparatively mean, inconsiderable, and in no way uncommon or extraordinary.”

It is not always easy or possible to match early and modern analyses of mental illness, but the symptoms of Arnold’s “Whimsical Insanity” are not inconsistent with those of schizophrenia.

It is also not clear what treatment Massingberd actually received at Arnold’s hands, apart from a place to keep him safe; this is never discussed in the correspondence.

In spite of the dire predictions of his friends and his doctors, Massingberd did eventually recover sufficiently to be discharged from Dr. Arnold’s care. On 1 Feb 1803, Arnold sends Routh a receipt for the final settlement of his accommodation costs.

Routh and Magdalen made a very public gesture of confidence in Massingberd’s recovery: he was invited to give the St. John’s Day sermon here in June 1804.

At this point, Massingberd largely fades from Routh’s correspondence. In 1812, there is some correspondence with the Bishop of Lincoln, in which the Bishop declares that he has not suspended him from his duties, but that Massingberd did not attend his Visitation sermon, or answer any of his letters:

It might, however, be observed that in refusing to co-operate with a pestering Bishop Massingberd was in full command of his senses.

All we know for sure is that Massingberd continued to receive his annual stipend as a Fellow until his death in 1824, but there is no mention of any payments for medical care. If, therefore, anyone reading this piece does have any more information about Massingberd’s later life, we would be delighted to hear from you.

This clutch of letters from Martin Routh’s papers shows that there was a great deal more to the treatment of insanity in Georgian England than is traditionally believed. In particular, Thomas Arnold’s treatment of his patients is much closer to modern sensibilities. It is also striking that Routh and the College were clearly seeking the best treatment for their colleague from the most highly regarded specialists of the day. Francis Massingberd’s life was clearly made unhappy by his illness, but at least he was able to rely on a College doing its best to help him and see that he was well looked after.

R. Porter, Mind-Forg’d Manacles:A History of Madness in England from the Restoration to the Regency (Cambridge, MA, 1987).