Home » Short Account of the Destruction of the Indies 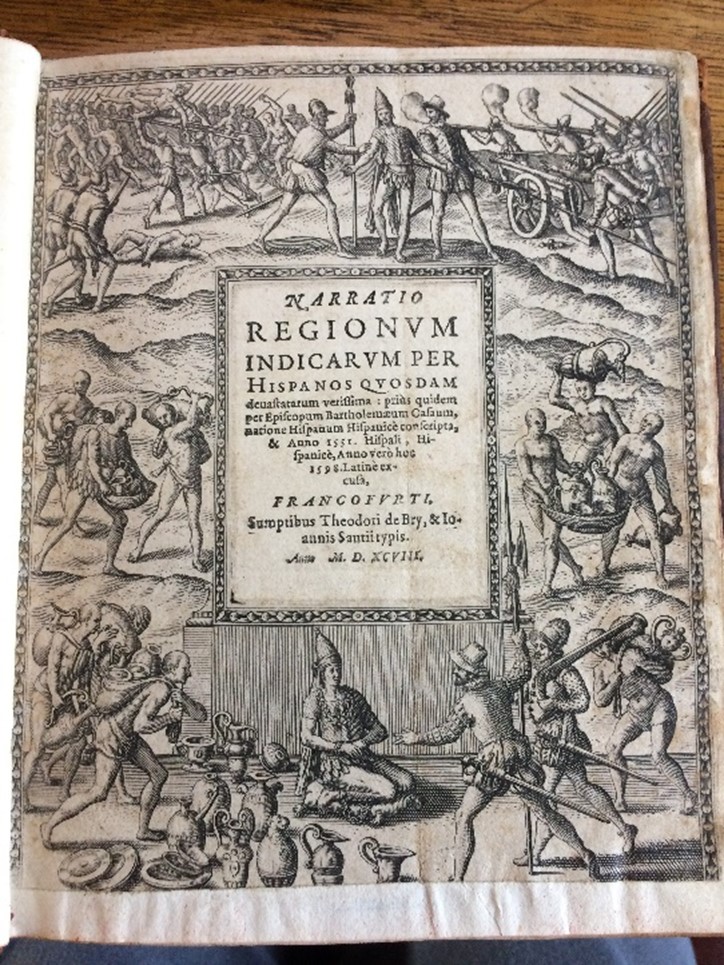 Bartolomé de las Casas was a Spanish friar who had arrived as one of the first Spanish settlers in the New World, travelling to the island of Hispaniola in 1502. As such, he had first-hand experience of the early days of Spanish colonisation and the brutal treatment of the indigenous peoples encountered by the European settlers. Indeed, at first he even profited from it, keeping Native American slaves through the encomienda system. This system enslaved the native population and distributed them amongst the conquistadors, quickly becoming ‘the central instrument of Indian despoliation and exploitation’ on Hispaniola (Clayton, 2012: p.28).

The brutal treatment of the native population, however, deeply affected las Casas and he resolved to protect them. His first step was to renounce his own participation in the encomienda system, freeing his slaves. His second – and much more ambitious – step was to petition the Spanish King Charles V (1500-1558) to protect the native population and stop their forced conversion to Christianity. Throughout his life, Las Casas travelled back and forth across the Atlantic championing this cause. Indeed, he was even granted the title of ‘Protector of the Indians’ by Cardinal Cisneros (1436-1517) in 1516.

To persuade people of his arguments, he published his thoughts in this book, described as ‘the most (in)famous book of the entire Spanish colonial period’ (Adorno, 2011: p.31). In it, Las Casas uses deliberately Biblical language to convince readers of his argument. In the text, for example, he compares the Indians to sheep amongst the Spanish wolves, assigning the native population the ‘innocent good will attributed to Christ’s apostles’ (Adorno, 2011: p.33). Likewise, he later compares the Indians’ diet to that of ‘the holy fathers in the desert’ (Adorno, 2011: p.33), emphasising their spiritual purity in comparison to the Spanish and forcing them to consider the wider morality of early colonisation.

Ultimately, Las Casas’ original text failed to persuade the Spanish authorities to alter their activities throughout Hispaniola and beyond. Despite this, La brevísima relación only gained in importance and was printed throughout Europe in subsequent decades, as this Magdalen edition published in Frankfurt in 1598 demonstrates. The continuing popularity of this text far from Spain may, at first, appear odd. Contemporary European politics, however, explains its popularity perfectly. In the 16th century, Habsburg Spain was a global superpower with dominions throughout Europe and involved in conflicts across the continent. Las Casas’ text, therefore, became an excellent propaganda tool for Spain’s enemies to promulgate the idea of the ‘Black Legend’ (Adorno, 2011: p.32) – the idea that Spain was a brutal Imperial power that committed numerous acts of atrocity throughout its Empire.

This edition emphasises this anti-Spanish rhetoric as it contains a number of brutal illustrations created by the famed printer Theodor de Bry (1528-1598). A good example can be seen above. Here, a Spanish priest blesses a native chief that is burning at the stake, whilst in the background Spanish cavalry use their superior European technology to massacre those fleeing the scene. The prominence of the Catholic priest in this image is deliberate and must be understood in the context of the Reformation sweeping central Europe at this time. With it, de Bry is not only commenting on Spanish imperial policy in America, but suggesting to readers that this brutality could easily be transferred to Europe to punish Protestant rebellion in the Habsburg dominions.

These ideas of Spanish brutality are further explored by de Bry in another engraving pictured above. Here, a Spanish official, presumably the governor Nicólas de Ovando, calmly looks on whilst natives are burned alive. Hanging from the tree is the native Queen Anacaona, who was executed by the Spanish in 1504 following an alleged uprising. Las Casas describes Anacaona’s hospitality to the Spanish in great detail (Saunders, 2005: p.6), so her horrific death here acts as a metaphor for the wider brutality of the Spanish conquest.

Although small and unassuming, this book packs a great deal into its 141 pages! It is not only one of the first volumes published to explore the morality of European colonisation in the New World, but also highlights the wider political and religious divisions within the continent through its striking – though brutal – engravings. As colonial history is re-examined in the 21st century, it will no doubt continue to be consulted for research and teaching purposes in coming years.

Saunders, N. (2005). The Peoples of the Caribbean: An Encyclopedia of Archaeology and Traditional Culture. Santa Barbara: ABC-CLIO.