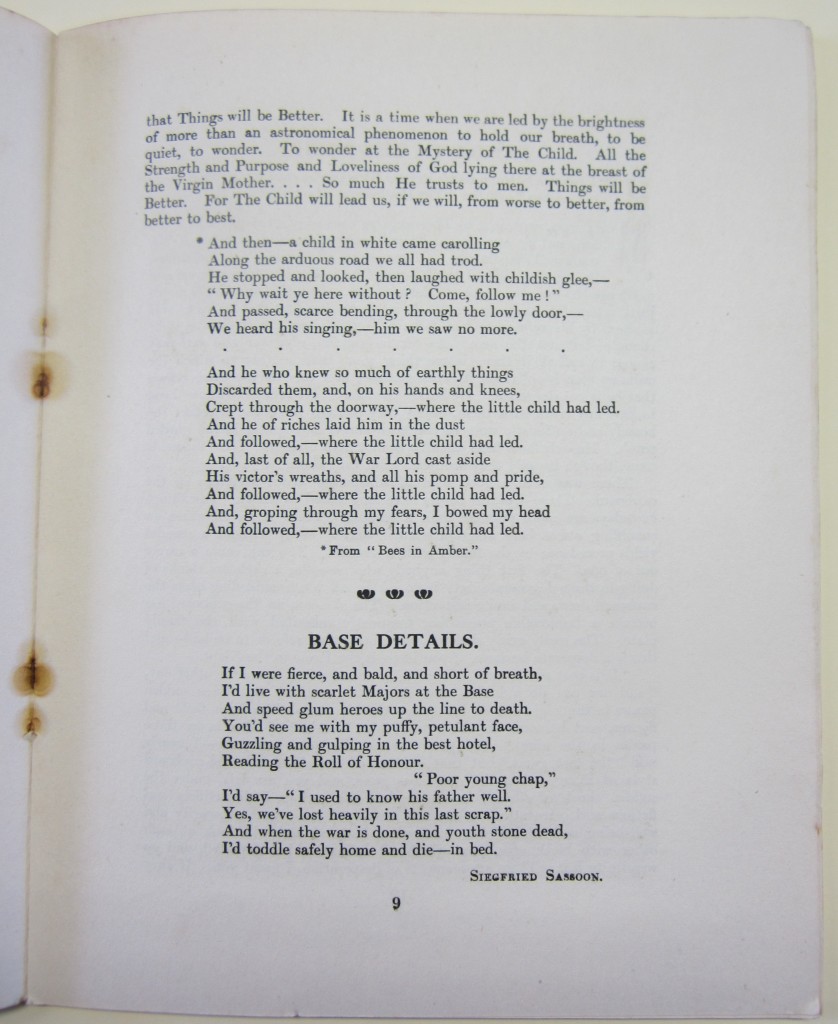 Saturday 28th June was the 100th anniversary of the assassination of Archduke Franz Ferdinand. Over the next few months, families, institutions and countries will be retelling their own stories of the Great War – some well-known, some obscure. This Treasure of the Month tells one of Magdalen’s war stories – one that, until recently, was completely unknown. It is the story of George Henry Bonner, a Magdalen man who played a small but important part in the careers of two of our greatest war poets, Siegfried Sassoon and Wilfred Owen.

Born in May 1895, Bonner came up to Magdalen in Michaelmas 1914, but left almost immediately to join the Army. He served in various infantry and artillery units until January 1917, when he was invalided out with ‘neurasthenia’, a catch-all diagnosis used to describe the huge number of psychological casualties coming home from the front. He was subsequently admitted to Craiglockhart Hospital in Edinburgh, a military hospital specialising in psychiatric cases.

While at Craiglockhart, Bonner became the editor of The Hydra, a magazine published by the patients containing their poetry, fiction and artwork, as well as social notices and hospital gossip. The Hydra is now known primarily for its early publication of poetry by Wilfred Owen and Siegfried Sassoon, both of whom were treated at Craiglockhart shortly before Bonner – indeed the first issue of The Hydra edited by Bonner contains two Sassoon poems, ‘Break of Day’ and ‘Base Details’.

It is mainly thanks to The Hydra that Magdalen has Bonner’s papers at all. In 2009, the Bonner family was contacted by John Garth, author of Tolkien and the Great War: The Threshold of Middle-Earth. Tolkien and Bonner had been contemporaries at King Edward’s School in Birmingham, and Garth was looking for anything that might illuminate Tolkien’s early years.

Unfortunately for him, Bonner’s papers contained nothing on Tolkien, but he immediately recognized the importance of the copies of The Hydra which the Bonner family had kept. Garth’s previous research had led him to the Craiglockhart archives, now held by Edinburgh Napier University, and he realized that two of the Hydra issues in the Bonners’ possession were copies of editions previously thought to be lost.

John Garth put the Bonner family in touch with Magdalen, and they kindly donated the Hydras to the College along with George Bonner’s other papers in 2013. Magdalen’s archives now hold these rare documents, which offer an astonishingly vivid glimpse of the lives of men who had seen and suffered some of the worst of the Great War. The full story of their discovery is told in John Garth’s blog.

Along with the copies of The Hydra, Magdalen’s archives also received Bonner’s personal papers, which form a detailed record of his own literary output. Bonner wrote copiously in verse and prose and after the war became a regular contributor to literary journals. One particularly controversial essay of 1927, entitled The Case Against ‘Evolution’, got him embroiled in an impassioned debate with Sir Arthur Keith, an anthropologist and President of the British Association for the Advancement of Science. The article also netted Bonner his largest haul of fan mail, although it is doubtful how gratefully he received the letter from an unknown admirer who urged him to consider that apes were “really bestialized animals of the lower creation” and “the product of foul passions of degraded men and women”.

It is Bonner’s large collection of poetry which offers his most intimate and engaging portrait, in which whimsical love poetry, evocations of Celtic mythology, and a certain amount of literary horseplay juxtapose with meditations on loss, fear and mortality. In his one clear ‘war poem’, ‘Let Us Taste Of The Joy Of Battle’, it is as if all Bonner’s literary arts stand dumbfounded as he recounts in unadorned blank verse the mental disintegration of a young officer:

..Before him
Is the barrage
Into which no power,
Mortal or immortal,
Can impel him.

For all its lack of poetical polish, it stands out for its absolute starkness and depth of feeling: the temptation to see a self-portrait is undeniable.

By the war’s end, though, Bonner seemed recovered enough to sound a note of hope, evident in his poem ‘The Years’, written within a few days of the Armistice:

Bonner’s first draft of ‘The Years’. Note the date: 18 November 1918, a week after Armistice Day.

Last night, ere yet the waning moon was old
Walking upon the mountain side I met
An ancient man, who said “My home is set
On the great road of time where I behold
The years pass by like dream on tattered dream.
Five years at length slunk by like murderers
Weary and blood bespattered, with the curse
Of men heavy upon them: they did seem
Eager to pass between the gates of doom
Where they shall sleep until the final blast
Of Gabriel’s trumpet wake them; yet the last
Went proudly as a victor might, to whom
I had spoken, but the silence that abides
In Time’s austere dominion held me dumb.”

“Old man,” I said, “What of the years to come?
“Far off I have heard them laughing like young brides.”

Sadly, though, the war had had a significant impact on Bonner’s health and he died in 1929, aged only 34.

The catalogue for the Bonner papers can be viewed in the Online Catalogues section of the Magdalen College Archives website. The papers themselves are available for study by appointment with the Archives – just email us at charlotte.berry@magd.ox.ac.uk or ben.taylor@magd.ox.ac.uk.