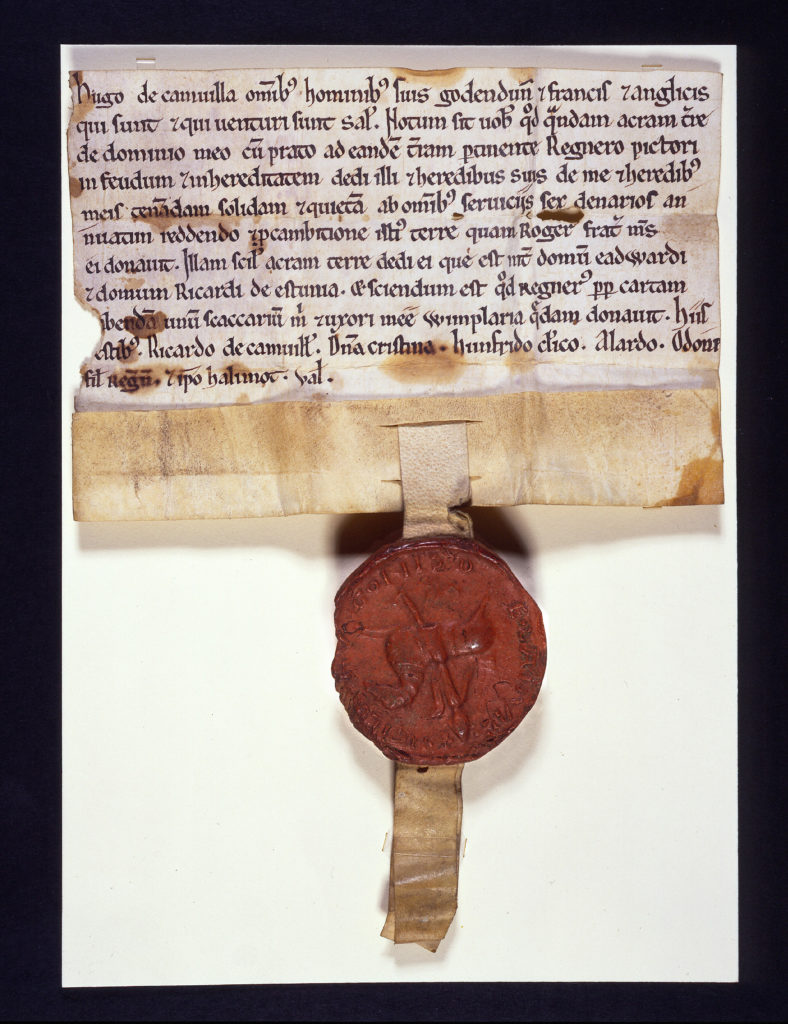 As the newly arrived Magdalen Archivist, and as someone who has spent most of his professional life working with medieval charters, there really is no better place to be than the college’s purpose-built late 15th-century Muniment Room. Home for over 500 years to Magdalen’s collection of around 13,000 medieval deeds, it is, quite simply, one of the wonders not just of the Oxbridge archival world but the wider UK one. It is also, as one of my predecessors noted in an earlier article on this blog, arguably the only room in the whole of Magdalen that would be instantly recognisable to any of our earliest Fellows.

But, if the existence of its contents, which range in date from around 1110 to the early 1600s, is known to many both within and outside the college’s walls, the average charter’s rather plain appearance and practical nature means they very often play second fiddle to manuscripts (especially the illuminated variety) in the medieval document pecking order.

Some of you may be thinking that this is hardly surprising. After all, Magdalen can lay claim to some fairly spectacular medieval items in its collections, including a beautifully illuminated copy of Bede’s Ecclesiastical History and a manuscript once owned by Thomas Becket, both of which I was lucky enough to see during a recent student teaching session hosted by Dr Hannah Boston in the Old Library just before my arrival.

But, while it is true that these items have a certain “wow factor”, and can be used by historians and other interested researchers to shed light on a wide range of issues, they represent objects that would have been inaccessible (both intellectually and physically) to most people in the Middle Ages. This would have also been true for charters in the early medieval period, when such things were typically issued (and retained) by those at the very top of medieval society.

By the 13th century, however, charters were being produced by members of almost every social rank, such that modern estimates for how many were written involve some fairly eye-watering numbers. (Michael Clanchy, for example, calculated that the peasant classes alone produced millions of charters in the century up to 1300.) They were, therefore, everyday objects produced en-masse with everyday implications.

Of course, survival rates come nowhere close to this number. But, as Magdalen’s own collection makes clear, modern historians and others can still call on thousands upon thousands of charters to inform their research.

To illustrate what this might entail, and to show why I personally find charters (and large collections thereof) so engaging, I thought I’d spend my first contribution to this blog looking in detail at just one of the items still housed in the Muniment Room.

The charter in question, pictured below, is among the oldest in the college’s possession and dates from the mid-12th century (reference Brackley B.186). It was issued by a certain Hugh of Canville, whose toponym shows he either came from – or traced his roots back to – what is today the village of Canville-les-Deux-Églises in Normandy. It relates to land in Godington (Oxfordshire) and was among those documents acquired by Magdalen in 1485 from the Hospital of St James and St John in Brackley (Northamptonshire), whence its modern reference.

The amount of land concerned is small (only an acre and a meadow pertaining to it), which the charter records was given by Hugh to a certain Regnerus Pictor in exchange for an annual rent of six pence and the return to Hugh of land given previously to Regnerus by Hugh’s brother, Roger. For this, Regnerus also gave certain items to Hugh and his wife (more on this below), with the charter being witnessed by a handful of individuals.

Having read this description, you might be forgiven for thinking that this does not amount to much. After all, not only is the land given to Regnerus small in size but it is anonymous in nature, being identified only as situated “between Edward’s house and the house of Richard of Easton” (inter domum Eadwardi et domum Ricardi de Estunia).

But charters are very much multi-dimensional objects, with their form and contents shedding light on a wide range of issues beyond the transaction they record.

In the first instance, therefore, this act allows us to trace where Hugh was from and to whom he was related. That he had Norman roots needs no further explanation, but the fact that the charter is addressed “to all [Hugh’s] men of Godington and the Franks and English, present and future” (omnibus hominibus suis Godendun’ et Francis et Anglicis qui sunt et qui venturi sunt) shows that ethnic distinctions between the conquerors and the conquered were still being made a century after the events of 1066. Hugh’s charter tells us he had one brother named Roger, while the first name in the witness list is that of Richard of Canville (d. 1176), in all probability another of his siblings, and a known courtier of Henry II (1154–1189) who died in Apulia while accompanying the king’s daughter, Joan (1165–1199), to Italy for marriage to William II of Sicily (1153–1189).

As for Regnerus, we can say nothing for certain of his origins, although his first name, which can be anglicised as Ragnar, suggests he may have had Scandinavian roots. Names and fashion were as inextricably linked in the Middle Ages as they are today, with the charter’s witness list showing that Hugh’s son bore the much more common French name of Eudes (Odo), perhaps a sign his father wanted his child to be able to assimilate more easily within a society whose norms were determined largely by England’s francophone rulers.

As for the second half of Regnerus’s name, this can be translated as “painter”, something that may indicate either his profession or provide fairly early evidence of an hereditary family name derived from that occupation. Whatever the case may be, Regnerus was clearly a man of some means, since the charter records that as countergift for the charter he gave to Hugh and his wife (perhaps the “lady Christina” – domina Cristina – of the witness list) a “chess- or counting-board” (scaccarium) and some “wimples” (wimplaria), respectively. Beyond the unusualness of this gift, the objects themselves clearly reflect gender differences related to the place of the recipients within the prevailing social hierarchy.

What at first glance therefore appears fairly ordinary soon reveals itself, upon closer inspection, to be rich and multi-layered. Sadly, Hugh’s act is not precisely dated, something not uncommon for charters of this period. The witness list nevertheless records a gathering of people from across medieval society, from a courtier of Henry II to a local cleric called Humphrey (Hunfrido clerico) and a certain Alardus, whose lack of title means he was probably a local peasant. Moreover, its closing words (et ipso halimot) show that these individuals had come together at the halimote (hall-moot), namely the manorial court, which, as the name implies, customarily met in the hall of the manor house. The term is Old English, although its origins as a legal institution remain somewhat shrouded.

The point, however, is that the issuance of Hugh’s charter brought people together at levels both wide-ranging and local in a way that Magdalen’s copy of Bede would likely never have done. It is also the sort of document that people or institutions in the Middle Ages would have brandished to defend their rights or assert claims. Charters were therefore inherently powerful objects, a power that many retain to this day (the college will, on occasion, use its deeds – and not its copy of Bede or any other medieval manuscript – to settle questions relating to its properties).

As objects of research, the above has hopefully revealed the richness of what is just a single document written over a mere eleven lines. Bringing charters together collectively only increases their potential in this regard, allowing historians to trace, reconstruct, and understand the web of obligations, relationships, and practices that underpinned medieval society. As such, the potential contained in Magdalen’s 13,000 or so charters is immense.

In closing, it should be noted that the above has focused only on the contents of Hugh’s charter. Its physical characteristics (layout, script, form, sealing) represent a set of separate issues altogether, with Hugh’s wonderful equestrian seal showing how this particular member of the knightly class wished visually to portray his authority.

Such things will have to wait, however, for a later blog. Of course, I promise also to write about other items and objects within Magdalen’s fantastically rich archives. I hope you will forgive me, however, if I occasionally explore more of what is to be found in the Muniment Room. I also hope you’ll enjoy exploring with me.