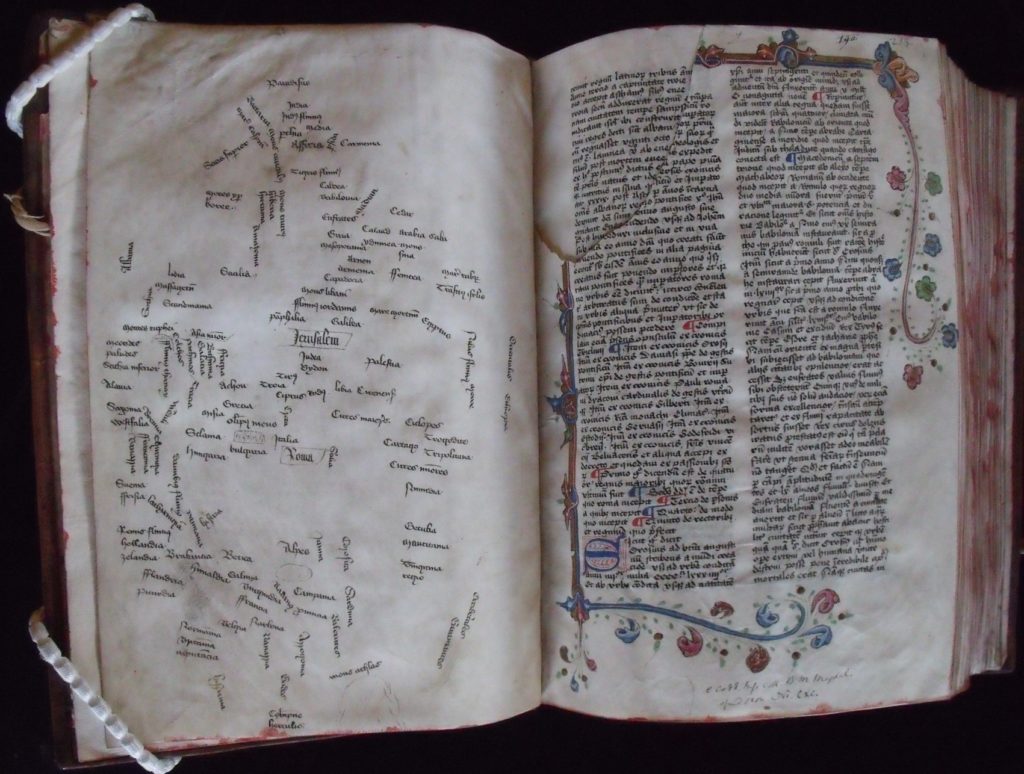 This month’s treasure looks at medieval world maps, and what they can tell us about their makers’ perception of the world.

The images above and below are from Magd. MS. Lat. 37(2), a 1440s copy of Jacopo Di Angelo Da Scarperia’s Latin translation of Ptolemy’s Cosmographia. The Cosmographia was one of the greatest attempts from antiquity to describe the world, a massive compilation of accounts of the world from numerous sources, made in the mid-2nd century. It is particularly interesting because although it isn’t a map per se, it is an attempt to describe precisely how to make an accurate world map. The first chapter describes how to draw lines of longitude and latitude, discussing the difficulties of transferring lines that are straight on a globe into lines on a flat piece of paper. This is an issue that still plagues cartographers today, and two of Ptolemy’s projections can be seen above.

The rest of the Cosmographia consists of extensive tables, as shown above, giving precise latitude and longitude for more than 8000 places in the world. By following Ptolemy’s advice on how to mark out a grid for longitude and latitude, and then plotting the points from his tables, a remarkably accurate map of the world can be created. Thus Ptolemy’s Cosmographia was an attempt to perfectly depict the places of the world and their relation to one another, a project which was obviously of importance in the days of the Roman Empire, when vast amounts of the known world was ruled by a single Emperor.

Medieval maps, on the other hand, are primarily symbolic. They are of little use for accurate navigation, but are designed as historical and educational tools, showing the history of the world and its people. One hugely popular medieval world-map was the T-O map, an example of which is shown above (halfway down the image, on the right). This is a simple circle, divided into three sections: the entire top half is Asia, a great semi-circular continent; below it to the left is Europa, and below it to the right is Africa. The continents are separated by the ‘T’ of the ‘O’: the Mediterranean as the upright; the Black Sea and the Don (or Tanais) on the left; and the Nile and the Red Sea on the right. The three continents are encircled by the ocean, as although it was known from Aristotle that the world was spherical and that there might be other continents, the ocean was seen as utterly impassable.

The orientation of these maps is very important. Whilst Ptolemy put the North Pole at the top of his map for sound mathematical reasons when making his projection (and today we follow his example), the T-O map instead has the Far East, seen as the location of Eden and Paradise, at the top. Similarly the very centre of the map is Jerusalem, site of the crucifixion.

T-O maps probably originated in the description of the world from the 7th-century writings of Isidore of Seville, and are sometimes known as Beatus maps, since one of the greatest early examples of them was the one drawn by Beatus of Liébana in the 8th century to show the spread of the early church. Our copy above comes from Magd. MS. Lat. 248, the Scroll Considerans, a magnificent 15th-century historical and genealogical roll showing the history of the world and the line of descent of the kings of Britain. It is probably relevant that the map is drawn near to Noah’s position on the roll, as it was believed that Noah’s three sons each fathered the people living on one of the three continents: Shem’s children populated Asia, Japeth’s Europe, and Ham’s Africa.

This elaborate world map follows the basic layout of the classic T-O map, but without the lines showing the continental outlines. Instead it consists of a series of place-names, from ‘Paradisus’ at the top down through ‘India’ and Middle Eastern or Old Testament locations to ‘Galilea’ and, in a box in the centre, ‘Jerusalem’. To the right of Jerusalem lies ‘Egiptus’ at the start of the North African coastline, which descends down through such places as ‘Libia’, ‘Cartago’ and ‘Tripolitana’. Across the Mediterranean lies the similarly boxed ‘Roma’ and the detailed body of Europe.

It was added to the leaf preceeding a mid-15th-century book of histories made in England, Magd. MS. Lat. 190. The texts in the book are Martin of Troppau’s Chronicon pontificum et imperatorum and Ranulph Higden’s Polychronicon, two of the greatest medieval historical chronicles, masterpieces that both drew together history from a wide variety of sources and constructed a readable narrative from it. It is revealing that this stylised map, like our T-O map before, was used to illustrate a historical chronicle. Medieval maps were as much historical as they were geographical, serving as graphical representations of our history: from our creation in Eden; down through Asia and Africa in the stories from the Old Testament; to the defining moment of the New Testament in the centre of the map; and then following the spread of Christianity to Europe after the crucifixion, a new world with Rome at its centre.

The Hereford Mappa Mundi is possibly the most famous of all medieval world maps, the largest one surviving, a unique masterpiece. Magdalen obviously does not hold the original, but we are lucky to have a magnificent facsimile version of it on loan as part of the McGowan Facsimile Collection (along with other treasures like the Duc de Berry’s Books of Hours). This has proved a popular addition to the Old Library, as the sheer level of detail that it contains and the stories that it tells are amazing. As with our other medieval world maps, it is orientated with paradise at the top, and it is then lavishly decorated with places and scenes from the Bible (the Tower of Babel, a blood-red Red Sea with the path of Exodus cutting through it, and Jesus crucified in the middle of the map), history and legend (the labyrinth on Crete and hundreds of other places), and travellers’ tales (with all sorts of mythical beasts and fantastical people, including monopods and cynocephali).

It would be impossible to do this map justice as part of a Treasure, but we recommend the following video for an introduction to it.

If you want to study in person our facsimile of the Hereford mappa mundi, or any of the other objects mentioned in this Treasure, please e-mail library@magd.ox.ac.uk.