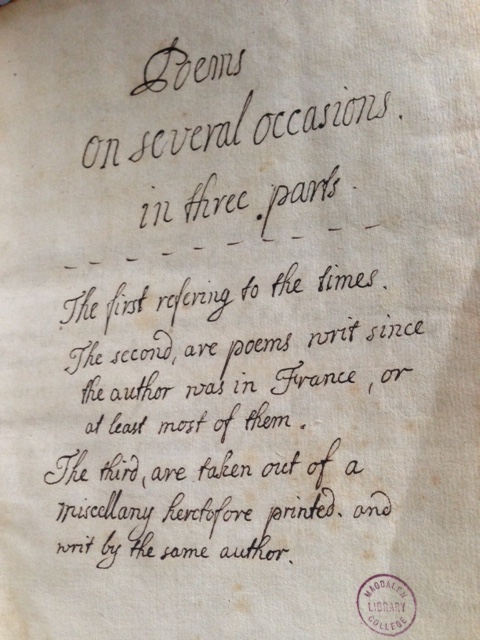 Jane Barker (1652–1732) is generally acknowledged as one of the most significant early modern women writers. Best known for her partly autobiographical novels, she was also a poet and a devout Catholic and devoted Jacobite, going into voluntary exile in St-Germain-en-Laye between 1689 and 1704, following James II when he fled England during the Glorious Revolution in 1688.

Magdalen Library holds the most important single text of Jane Barker’s poems. Magdalen MS 343 is a partly autograph volume containing 272 pages of 80 poems written during her exile. It is the only record of her time in St-Germain and is an important source of biographical information about her. In it we learn of her conversion to Catholicism and self-imposed exile in France, as well as the deterioration of her eyesight and cataract operation in 1696.

The volume is in three parts, with a general title-page.

The volume is prefaced with a dedication ‘to the Reader’, in which Barker asks that “the whole will be consider’d as the work of a blind person, and according all its defects pardon’d” and  requests that the reader will allow the inclusion of a “little, idle love poem or so”.

Parts two and three are written in Barker’s own hand, while part one is written by her cousin Colonel William Connock with revisions by the author. Magdalen’s manuscript is of interest to scholars of English Catholicism and Jacobitism, as well as feminist writing and the role of women. Part One is entitled “Poems referring to the times” and comprises poems on Catholic and Jacobite themes. Part Two includes an elegy to King James II who died in 1701. Barker never married and was indebted to her brother for her education. The collection contains her most famous poem “A Virgin Life”.

Provenance information about the manuscript can be found on the upper pastedown of the volume. The manuscript was given to Magdalen by William Dunn Macray (1826–1916) who was a Fellow of the college 1891–1916.  Macray’s signature with the date 1886 can be seen on the top right of the upper pastedown, as well as his handwritten notes recording that he purchased it from a dealer named Sakeld for £1 1s. in February 1886. Sakeld had purchased it in 1884 for 15s.  The volume was first recorded in the library of literary scholar and book collector the Rev. Thomas Corser (1793–1876) of Stand Rectory, near Manchester. It was then acquired by James Crossley (1800–83), the author and antiquary who continued Corser’s editorial work of the Collectanea Anglo-Poetica for the Chetham Society.

Magdalen’s MS 343 is very much a working manuscript and contains many revisions. It provides a rare insight into an early woman writer at work.

The pages are very heavily marked and even include Barker’s own thumb print in brown ink made when she was almost blind. King (2000) remarks “that the volume should preserve the material trace of a writer who made so little imprint on her culture is a wry irony Barker would have enjoyed”.