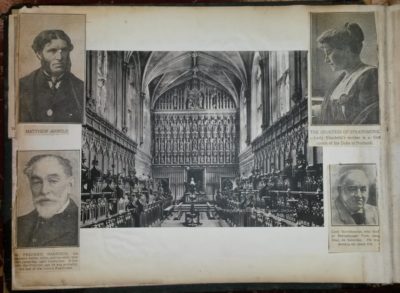 In contrast to many of the earlier Treasures of the Month, this is one of our newest acquisitions, and it’s one that we’re very excited about up here in the Founder’s Tower. Back in October last year, an eagle-eyed colleague tipped us off about a scrapbook full of Magdalen-related material was coming up for auction. Robin investigated, and something about it made his archivist’s antennae twitch, so we duly snaffled it.

How right he was: a quick comparison with some of our other records satisfied us that the scrapbook had belonged to Richard ‘Gunner’ Gunstone (1840–1924), Steward of the JCR from 1879–1914. Gunner was barman, tobacconist, mentor, confessor and professional man of the world to generations of Magdalen men including Edward, Prince of Wales—latterly (if briefly) King Edward VIII.

The Archives have little personal material from College servants. Most of our information on non-academic staff comes from our historical account books; these record salaries, promotions and such like, but are sadly lacking in any more intimate detail. So a volume like this really is treasure to us. It gives us a point of view rarely represented in our collections as well as an insight into a man who, at least among Magdalen alumni, really was a legend in his own lifetime.

Gunstone’s family (variously as Gunson, Gunston and Gunstone) had been working at Magdalen since at least the mid-17th century, probably first as carpenters, then masons and quarrymen before gradually moving up the ranks. His attachment to the place is clear from the large photographs of the College which adorn many of the pages. In addition to these are huge numbers of short newspaper extracts recording all manner of College-related events and factoids, from the news that Richard Holman Hunt’s 1890 painting May Morning on Magdalen Tower fetched 1900 guineas (about £200,000 today) in an auction at Christie’s to the revelation that one of his young ex-charges, Lindsay Fitzgerald Hay (C. 1910–14) was found to be the tallest officer in the British Army at 7 feet 3 inches.

One alumnus whose career Gunner followed with particular interest was Compton Mackenzie (C. 1901–04), a celebrated young author whose good looks and variegated career as a soldier, spy and political activist made him one of the most glamorous characters of early 20th-century British literature. The esteem was mutual: Mackenzie wrote an adoring and thinly-disguised portrait of Gunstone in his semi-autobiographical novel Sinister Street.

Gunner’s most famous young acolyte was probably Edward, Prince of Wales (C. 1912–14). A small cutting pasted next to a photo of the Prince makes the priorities of his education at Magdalen clear. “He is learning little of academic things” admits the anonymous author, “but he is graduating in knowledge of the world, or at any rate that part of the world which goes to Oxford.” This implicit revelation of the Prince’s lack of intellectual accomplishment would be pretty damaging nowadays, but in Gunner’s time the sentence could almost have been written under the College crest: it was the avowed purpose of then-President Herbert Warren to make Magdalen into a sort of imperialist Sandhurst, moulding the sort of chaps who could govern vast and far-flung dominions; and if they couldn’t quote from Homer in their despatches, then no matter. Besides, academic excellence notwithstanding, did it not make perfect sense for Prince Edward to be educated alongside the men who might one day run his Empire for him?

One incident in the Prince’s career here was completely new to us: that at some point he organised a cricket match between a team of Magdalen College employees and the Royal Household’s own cricket club. It was a 2-match series; one at Magdalen, the other at Windsor Castle. The Royal Household won both. Gunner did not play—he was by then in his seventies—but he’s there in the memorial photo, and he was the one to give the speech of thanks at the post-match dinner. We know Gunner had been a keen cricketer in his day—elsewhere in the scrapbook, he appears in the Oxford City Cricket Club team photo of 1886—so we can imagine what an immensely proud moment this must have been for him.

In contrast to its mostly light-hearted contents, the last pages of the scrapbook create an inescapable sense of tragedy. They are taken up almost completely by the obituaries of former Magdalen men who died during the First World War. Gunner’s career as JCR Steward spanned the three decades up to 1914: more or less every Magdalen casualty would once have sat in his room, drinking his coffee and smoking his cigarettes. True, there are also reports of the honours which some of them won, including E.A. McNair’s (D. 1913–14) Victoria Cross, but these must have been scant consolation next to the slaughter chronicled in the same pages.

Overall, 212 Magdalen alumni lost their lives in the First World War. Gunner retired in 1914: we can only imagine how painful it must have been for him to see his last generation of young charges so decimated. A poem entitled “The deserted College in war time”, gives us a sense of his feelings. Dated 7 January 1915 and probably composed by Gunner himself, it has been handwritten into the scrapbook.  The mood is desolate:

No sound across the cloistered quad

As daylight fades away,

No laughter borne upon the air,

No lights with cheerful ray.

Where are the sounds of long ago

That echoed through these halls?

Nought but the silence now is found

Among the old grey walls.

Deserted is the stair—

Stilled are the steps for evermore

That used to enter there.

For more information on the life of Richard Gunstone and his family, see The Gunstones of St Clements by Richard Sheppard (Magdalen College Occasional Paper 6, 2003); available from the College shop.