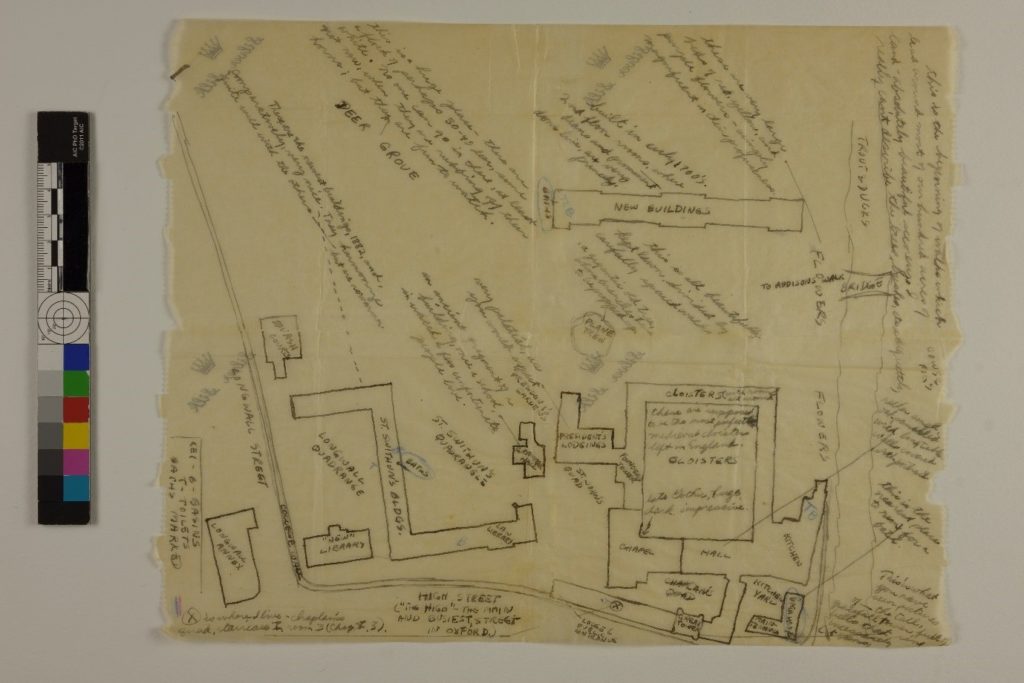 In this month’s Illuminating Magdalen post, you’ll be able to read about an exciting new acquisition to the College Archive. First, Dr Charlotte Berry gives us an insight into this acquisition, before Celia Bockmuehl describes the work done to ensure it is conserved for future generations. Read on to discover more!

One of the best things about being an Archivist at Magdalen is checking the pigeonhole in the Porter’s Lodge to see if any exciting post has arrived. Letters arrive from all over, often containing unexpected gems to be added to the College’s outstanding archive collections, which date back to the 12th century. We are keen to collect anything relating to the Magdalen community, especially for more recent centuries.

Imagine the surprise when this wonderful letter and map appeared out of the blue from the USA (see below), kindly donated by the son of an American Rhodes Scholar who arrived at Magdalen in October 1957.

Richard Pfaff (or Dick, as he was known) hailed from Oklahoma and studied at Harvard University as an undergraduate. He came to love England during his time here as a graduate student. Dick became a renowned expert in English medieval history and returned here often, maintaining close links with Magdalen throughout his life. So this very first letter home and his hand-drawn map are therefore all the more illuminating in sharing his initial impressions of Oxford and the college that was to become his home for several years. This was a significant period in Dick’s life that would pave the way for his later career as a scholar and priest.

Dick sailed to Southampton as a Rhodes Scholar in the autumn of 1957 on the US United States with a number of compatriots. He sent a short letter from the boat, but he saved up his first impressions for an extra long letter home, complete with instructions requesting weekly letters from Mom, Dad and his sister Barb to combat the homesickness. The boat was met by the Warden of Rhodes House, a Mr Williams who was “a real jewel – a very quiet, almost mousy looking man who has … one of the acutest minds and cleverest tongues, I’ve ever heard”, who was certainly very efficient at getting them all through customs in double-quick time. The Rhodes Scholars travelled by bus to Oxford and then went straight to a reception at Rhodes House, where second year students then showed them to their home colleges and their rooms.

Dick was enchanted by the age and beauty of the College, and he was also impressed by the candlelit Evensong, sung by the “paid chorus of boys and men … with the members of college who come sitting in little sorts of stalls along the aisle”. He had two rooms in Chaplain’s Quad, and drew a map of his room on the reverse of one of the pages of his letter. There were four steps up into his bedroom and sloping ceilings, the floor “rolls sort of like the deck of the SS United States”. He rented a radio for 30 shillings a term, and had an electric ring and a tea kettle in this room.

Less satisfactory were three specific aspects of college life: the cold, the sanitation and the food! The “small eight-coil electric heater” to heat his two rooms was insufficient to say the least, despite the sunny weather, and no fridge was needed to keep the milk bottle cold. He started straightaway to send his laundry off site instead of trying to dry it in his rooms.

Dick definitely disliked sharing a washroom on his staircase with other students, so purchased a washbowl and pitcher instead for his room. After he discovered the baths in the bath house which turned out to be rather draughty, he decided to go out instead for a 2 shilling shampoo as “it seems to me that to wash your hair and then run about fifty yards through two quadrangles would be sheer suicide”. He reflected wistfully, “I often would give an awful lot for an hour in the pink bathroom at home”.

Worse was yet to come: “The third gripe is the food, which is absolute slop, very sparingly doled out, … but one can eat even slop if he’s hungry enough … Now if I can only keep clean, why, that’s all in the way of creature comfort a man really needs in life, and I think perhaps I can eventually manage all three – or at least come to terms with my exacting standards on them”.

In the most fascinating part of his first letter sent home, Dick traced a college map out on toilet paper, which was tough, crackly and up to the job, despite the brand-name ‘Silver Silk’. He then created his own detailed labels and descriptions of the trout and ducks in the river, Addison’s Walk’s “absolute beautiful scenery I really can’t describe”, and the Cloister which is “supposed to be the most perfect medieval Cloisters left in England”. The lawns were “beautifully kept”, the herbaceous border is “very large with beds of red, yellow and purple flowers – simply magnificent in their profuseness”, and the branches of the gigantic plane tree had to be propped up. Hall is “rather small, oak-panelled, with long tables, walls around with portraits”; Chapel is “Gothic, large, dark, impressive”, the bath-house is pointed out in the Kitchen Yard, and the Great Tower which is “what you have seen postcards of – the tall graceful tower, full of bells that ring incessantly, it seems”.

There seemed to have been a strong American presence in college that year, and he even bumped into distant acquaintances around town from Harvard University, so he settled in rapidly, unpacking his trunk, and signing up immediately for singing and a rowing meeting. On seeing some of the sights of Oxford, he found out that “one of the most pleasant of these is the girls, many of whom I think are extremely attractive – mostly not undergraduates however, but around Oxford it is apparently respectable to take out shop girls as much as college girls”.

Dick stayed at Magdalen from 1957-1959 and 1962-1963, and received his PhD in 1965. He married Margaret Campbell in the college chapel in 1962. On returning to the States, he studied at the General Seminary in New York and was taken into the priesthood in 1966. He then became a professor of history at the University of North Carolina until his retirement in 2006, returning to Magdalen as a Visiting Fellow from 1990-1991.

The College Archive is very indebted to Dick’s son for donating this quite extraordinary glimpse into the Magdalen of the late 1950s, from the perspective of a newly arrived student. Whilst modern student life in 2020 is very different (and hopefully the heating, sanitation and food have improved), it seems clear that initial impressions of Magdalen’s remarkable setting and friendly community endure across the decades.

The map arrived at the Oxford Conservation Consortium studio in a sorry state. The main problem lay in the use of self-adhesive tape that had been applied to hold the individual sheets of ”Silver silk” toilet tissue together and had been used across the middle of the map to reinforce the horizontal split where the individual sheets were perforated for ease of separation. The tissue itself was far from silky and can best be compared to a slightly yellowed, thin and crispy baking parchment with a good rattle – a far remove from the toilet tissue that we are used to today!

The map had been folded for sending home and as a result 3 horizontal creases ran across the sheet as well as the vertical fold along the line of the tape.

The aim of the treatment was to remove the tape and as much of the adhesive as possible whilst retaining, as far as possible, the original nature of the object.

The tape was carefully peeled back on itself after applying gentle heat via a tacking iron which allowed just enough heat to soften the adhesive but not enough to soften the shiny carrier.

One of the difficulties was just how sticky the adhesive remained.

Once the adhesive was removed, the sheets were reattached using Japanese kozo fibre paper adhered with wheat starch paste.

The map has now been placed in a protective Melinex sleeve for safe handling.