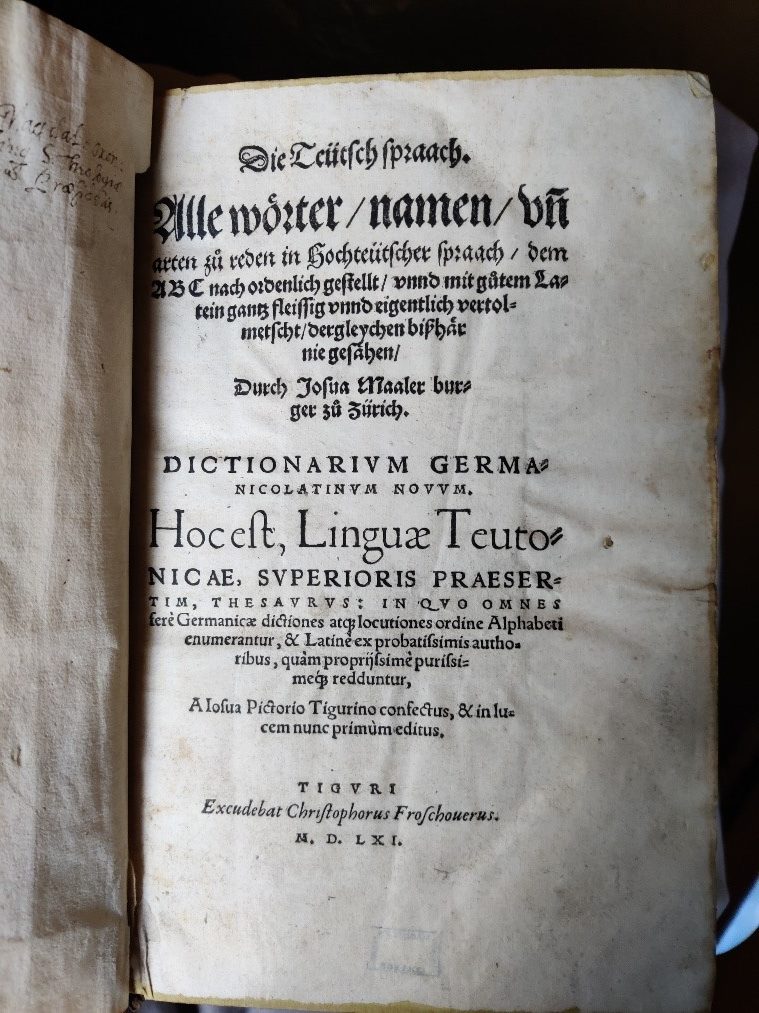 This month’s Illuminating Magdalen article has a lexicographical focus! Printed way back in 1561, the thick tome pictured below (536 pages long) is one of the oldest German dictionaries in existence. A key part of German linguistic history, both its content and provenance make it an interesting and important part of the Old Library’s collection.

The dictionary was compiled by the Swiss lexicographer and bookbinder Josua Maaler (1529–1599), who wanted to create a German-language dictionary partly for humanist reasons. He believed that such a dictionary would raise the status of German and particularly Swiss German in society. His aims are reflected on the title-page pictured above. The German script is deliberately written first and followed by a Latin translation – reflecting the vernacular’s importance to Maaler and making the dictionary already unique in comparison to previous German dictionaries.

This uniqueness is reinforced when the dictionary is opened. In comparison to the earlier Dictionarium Latinogermanicum (1535) by Petrus Dasypodius (1495–1559), this dictionary is the first to focus exclusively on the German language. It is, therefore, organised alphabetically by the German, not by the Latin as was the case in previous dictionaries. Above, you can see this order in action, open at a particularly apt word for this time of year: der Frü[h]ling, or spring in English. As a result of this ordering, Jakob Grimm (1785-1863) described it as ‘das erste wahrhaft deutsche Wörterbuch’ [the first true German dictionary] in the prologue to his own monumental dictionary published in 1854 (Grimm: 1854, Band 1, xxi).

This book, though, is not only significant due to its content. Thanks to the inscription pictured above, we know a lot about the provenance of this volume. It reveals that it was donated to the library by John Harding (1562-1610), who was President of the College from 1607-1610. According to Macray (1894), Harding was ‘the donor of two books, Pictorius’ Thesaurus linguae teutonicae, 4⁰, Zurich 1561, and a folio German Bible printed at Wittemberg in 1584, which however, was not received until 1616, six years after his death’ (v.3, p.80).

As revealed in our previous post about the Lutheran Bible he donated, we know that Harding played an important role in the translation of the King James Bible. Although the translators worked from Greek, Hebrew, and Aramaic texts for this Bible, this dictionary reinforces the idea that Harding consulted his Lutheran Bible as part of these efforts. As modern languages were not on the curriculum anywhere (and there was no tradition of modern languages as academic subjects that could be ‘taught’), almost everyone would have to teach themselves. If Harding wanted to read the Lutheran text and did not know any native German speakers, he would therefore have needed to purchase a dictionary to teach himself. This book suggests, therefore, that Harding felt that he needed to read the original German to understand how Luther translated his Bible, and to feed that into his own translation. It shows the erudition – and scholarly vigour – of the team that translated the King James Bible over 400 years ago!

This book has a beautiful binding, decorated with blind-tooled double-fillet borders and a decorative oval centrepiece framed by triple-fillet borders. This decorative oval design is typical of Oxford book-binding (see Pearson: 2000, p.77 and pp.103-106), so it is probable that Harding had it bound either in Oxford or at least in England. In the picture above, you can also see the remains of clasps on the upper board, together with staple holes for a book chain on the top right.

In today’s Google world, we perhaps take it for granted that we can instantly look up the translation of any word. This beautifully-bound early dictionary is an early step in the journey to make that world a reality. Its intriguing provenance and links to Magdalen’s Lutheran Bible only make it further worthy of study, revealing the intellectual efforts of college members over four centuries ago.

Thanks must also be given to Dr David Rundle for his assistance in the research process for this post.