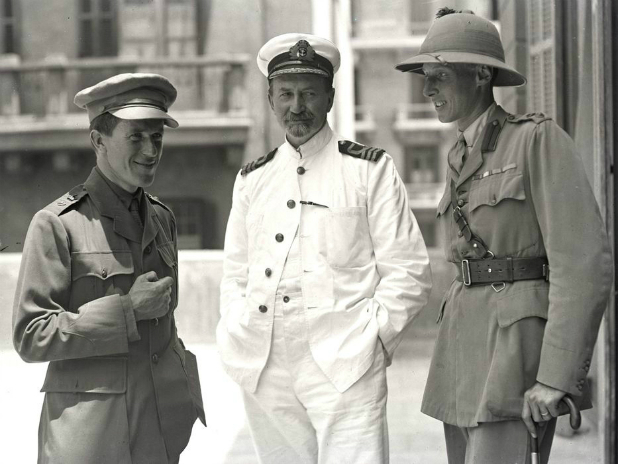 Magdalen College Archives would like to invite you to a virtual conference on the British archaeologist, intelligence officer and author David George Hogarth (1862-1927). Hogarth’s papers were donated to Magdalen College by his family in late 2019; the College will publish a catalogue of the collection early in 2021.

The conference will take place via Zoom on Saturday 23 January 2021; please email archives@magd.ox.ac.uk to register your interest. Registration will close at noon on Thursday 21 January.  We hope to see you there. Recordings will be made to those interested – please contact the Archivist for further details.

David Hogarth was a distinguished field archaeologist of Greece, Asia Minor and the Middle East and the Keeper of the Ashmolean Museum from 1909 to 1927. He was a friend and mentor to T E Lawrence: Lawrence’s first archaeological post was on Hogarth’s dig at Carchemish (Karkemish) on the Turkish-Syrian border; during WW1 the two men worked together at the Arab Bureau, where Hogarth was a senior officer and organiser. After the war, Hogarth was an adviser to the British delegation at the Paris Peace Conference.

Most of Hogarth’s papers have been held by his family since his death. They will now be publicly accessible for the first time. The collection includes a large volume of personal correspondence with his family and with renowned figures of the time including T E Lawrence and Gertrude Bell. There are also archaeological and academic papers, and records and memorabilia of his war work.

Ben was the Archivist’s Assistant at Magdalen from October 2013 until December 2019. In January 2020 Ben began a 12-month project to catalogue the papers of David George Hogarth. He graduated from Cambridge University in 2002 with a B.A. (1st class) in Russian and Latin, after which he worked as a TV researcher, political analyst of the former Soviet Union, and freelance translator. In 2012, he decided to retrain as an archivist, and was awarded a Diploma with Merit in Archive Administration by the University of Aberystwyth in 2018.

First Impressions of the Hogarth papers
Following roles as a book specialist at Sotheby’s and Associate Director at Christie’s, Mark James FLS was successively Head of the Travel Departments at Henry Sotheran and Bernard Quaritch before co-founding the rare book business Type & Forme in 2018. Since then Type & Forme has handled the sale of Jeremy Wilson’s working library and archive to Magdalen College, assisted with loans and valuations for Magdalen’s exhibition ‘Lawrence of Oxford’, and prepared a preliminary listing and valuation of the Hogarth papers for Magdalen.

Caroline Barron
Hogarth before Magdalen: his childhood and background
Caroline Barron is an emeritus Professor of Medieval History at Royal Holloway, University of London. She is particularly interested in the history of medieval London, in the reign of Richard II and in medieval women. Her interest in D.G. Hogarth stems from a family connection: he was her grandfather. It is through the generosity of Caroline and her family that the Hogarth papers have been donated to Magdalen College.

Father Confessor: What the Hogarth Letters Reveal about his Relationship with TE Lawrence

Adam has been an archaeologist since 2008 and has worked extensively throughout the Middle East and the United Kingdom. He has completed his undergraduate studies at Carleton University and obtained his Master’s from the University of Sheffield. Between 2013-2017 Adam worked at the Palestine Exploration Fund and on different projects for the British Museum, most notably the Iraq Emergency Heritage Management Scheme. Adam currently works in the UK as a heritage consultant for the design and consultancy firm Arcadis.

The Uncrowned King & the Desert Queen: Selections from the TE Lawrence and Gertrude Bell Letters in the Hogarth Collection

David Hogarth in Crete: Archaeology and Politics in the Aegean “Promised Land”

Antonis Kotsonas is Associate Professor of Mediterranean History and Archaeology at the Institute for the Study of the Ancient World, New York University. He holds a Ph.D. from the University of Edinburgh, an M.Phil. from the University of Cambridge, and a B.A. from the University of Crete. His research focuses on the material culture and socio-economic history of Greece and the Mediterranean in the Early Iron Age and the Archaic period, with broader research interests extending from the Late Bronze Age to the Roman period. His latest book is the co-edited Companion to the Archaeology of Early Greece and the Mediterranean. He has conducted fieldwork and finds research on Crete, and in the Cyclades, Euboea, Macedonia and Latium; and comparative studies across the Aegean, and from Italy to Cyprus.

David Hogarth at the Arab Bureau

Dr Bruce Westrate is a scholar and historian specializing in the British Empire, the modern Middle East, modern Africa and South Asia. His book, The Arab Bureau: British Policy in the Middle East 1916–1920, has been in print since 1992 and continues to be widely cited and praised by such publications as the Journal of Military History, Oxford History of the British Empire and the Middle East Journal.