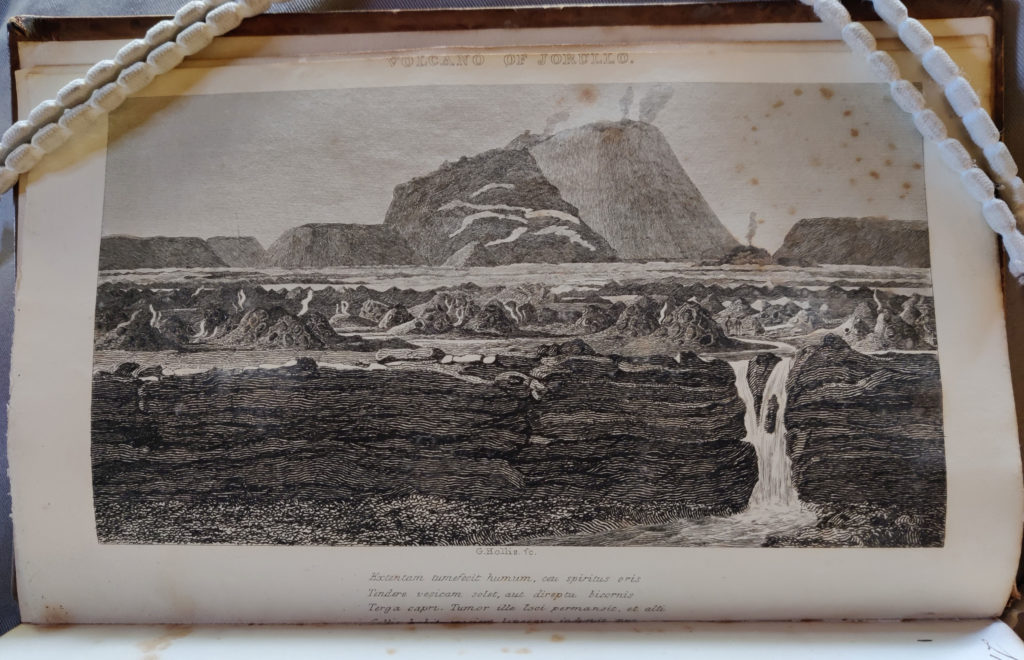 Title: A description of active and extinct volcanoes: with remarks on their origin, their chemical phaenomena, and the character of their products, as determined by the condition of the earth during the period of their formation.

As we start June and (hopefully) welcome the return of hot Summer days, this month’s Illuminating Magdalen article focuses on a very different kind of heat – that of volcanoes. Written by the famous botanist, geologist, and Magdalen alumnus Charles Daubeny (1795-1867), it focuses on his influential description of active and extinct volcanoes from 1826 (Magd.Daubeny-C. (DES) 1825 (1)).

As you can see from the title-page above, Daubeny based this pioneering work on lectures he had delivered at Oxford University. He had started his career at Magdalen some years before, being elected to a demyship in 1810 under Dr John Kidd. Thanks to his studies, he developed a fascination for the natural world that remained for the rest of his life. His specific interest in volcanology, though, was the result of a later trip to the volcanic Auvergne region in France. As a result of this visit, he published his Letters on the Volcanoes of Auvergne in The Edinburgh Journal (also held in the Old Library – shelfmark: Magd.Daubeny-C. (MEM 3) (14)).

Following this trip, he became a Professor of Chemistry at Magdalen in 1822 and remained in academia for the rest of his life. Magdalen’s great gift to Daubeny’s work was the freedom it gave him to conduct research in the areas he was most interested in. Consequently, he could travel to Hungary, Transylvania, Italy, Sicily and Germany to extend his knowledge of volcanic phenomena. He incorporated all of this research into his lecture series at Oxford and, later, this influential text.

The content of the book closely mirrors his travels. Focusing first on the European countries that he visited, the lectures then describe volcanic phenomena on other continents. A particularly detailed section focuses on what is now called the Trans-Mexican Volcanic Belt, a line of volcanoes that stretches for almost 1000km (Luca et al., 2012: p.122). A detailed map of the belt is included in this book, which can be seen below:

Daubeny was clearly fascinated by this range, deciding to include an intricate drawing of one Mexican volcano in this belt – el Jorullo – at the start of the volume (pictured below). This particular volcano is one of the youngest in Mexico (Stevens-Middleton, 1926: p.89), first erupting in 1759, and had long held the interest of scientists. In 1803, for example, it was visited by Alexander von Humboldt during his Spanish American expedition (Stevens-Middleton, 1926: p.89). As Daubeny was particularly interested in the formation of volcanoes, it is not surprising that he decided to include it.

In common with other scientists at the time, such as Humphrey Davy (1778-1829), Daubeny thought that volcanoes were produced by the contact of air and water with subterraneous unstable metals. Such metals were thought to be common under the earth’s surface (see Davy, 1829: p.154).

We now know that volcanic eruptions are the result of plate tectonics, but this error by no means negates the intellectual importance of this work. Instead, it forms a key text in early volcanology, summarising a vast amount of research. This sheer amount of research is emphasised by a tabular view that Daubeny produced, bound at the end of the volume (Magd.Daubeny-C. (DES) 1826 (2)). The extensive table (pictured below) contains a chronological list of volcanic phenomena, a list of countries where volcanoes occur, and a list of comparative heights of volcanoes across the globe. When fully extended, the table dwarfs the book itself!

Charles Daubeny was an influential figure – perhaps the first Oxford academic that could be described as a ‘scientist’ in the modern sense of the word. Consequently, he has left a large legacy at Magdalen. For those interested in discovering more about his life, the College contains a vast amount of supplementary material relating to Daubeny. This material includes his extensive library of mainly 19th century books relating to science and the history of science, held in the Daubeny Building that bears his name. Additionally, the Archives contain his papers from 1816-1867. This treasure trove of material includes his personal correspondence, experimental notes, and notes for his many lecture series.

In summary, therefore, this book is not only a fundamental piece of early volcanology, but also provides us with an insight into the pioneering scientific research completed by members of Magdalen during the 19th century. Together with its companion volumes in the Daubeny Library and the Daubeny material held in the College Archives, it becomes a fascinating resource for all those interested in the history of science in Oxford and wider afield.