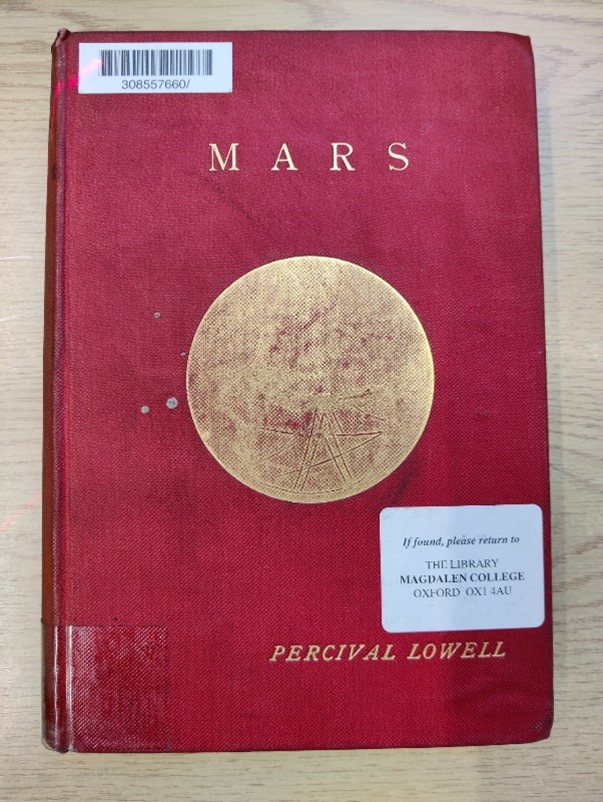 Mars is currently a busy place. Following the July 2020 launch window, several missions have now arrived, each ready to revolutionise our knowledge of our closest neighbour. Last month, NASA’s Perseverance rover successfully landed, the UAE’s Hope mission entered Martian orbit, and the Chinese Tianwan-1 mission will land another rover on the Martian surface in May or June.

This fascination with the Red Planet, though, is far from modern. Throughout the centuries, humanity has tried to imagine what life would be like on the Martian surface and this is reflected in Magdalen’s collections. In this month’s Illuminating Magdalen’s article, we focus on one such vision of Mars, written in 1895 when astronomy was still in its infancy.

Stored in the Reserve collection of the Longwall Library, this book (pictured above) was written by the American businessman and astronomer Percival Lowell (1895-1916). In it, he builds on the intriguing idea that canals existed on the Martian surface, created by an advanced form of intelligent life. This theory was based on the work of the Italian astronomer Giovanni Schiaparelli (1835-1910) in 1877, who noticed a network of linear structures on the planet’s surface. When creating his map of the planet, he named these canali, the Italian word for ‘channels’ (Launius, 2018: p.248).

Schiaparelli’s apparent discovery captured the imagination of astronomers the world over, but especially in the United States. Many in the English-speaking world had mis-translated canali as canals – a word that suggests artificial origin. In this book, Percival Lowell took this idea and ran with it, detailing his observations of the Red Planet from his observatory near Flagstaff, Arizona. Lowell had correctly identified that the main obstacle to life on Mars would be ‘how to get enough water to sustain life’ (p.127) due to its desert-like conditions. After also observing the linear structures on the surface, he argued that the only explanation for their existence was the work of an intelligent and sophisticated alien race to manage the available water as effectively as possible.

To support his claims, he created detailed maps of the ‘canals’ on the Martian surface along with a sophisticated series of names for them (see pictures below). After measuring their width (over 30 miles) and length (an average length of 1500 miles (p.132)), he concluded that their main purpose was to act as irrigation for agriculture on the planet’s surface, taking water from poles to population centres on the equator.

Lowell even considered how it would be possible for such canals to be constructed. Correctly identifying that gravity on Mars’ surface would be much lower than on Earth, he argued that Martian life could consequently be much larger than equivalent terrestrial life. Such Martian life, he figured, would have a strength ‘eighty-ones times as great as man’s, whether in digging canals or in other bodily occupation’ (page 205). His conclusions may seem farfetched to us today, but it is important to remember that Lowell was observing the planet with a very early telescope and in an era of frenzied speculation around Mars and its potential alien life. H.G. Wells’ famous novel The War of the Worlds, for example, is contemporaneous to his work and perfectly demonstrates the enthusiasm of the time.

This text captured the public’s imagination and many continued to believe his claims right into the space age. Indeed, it took until 1965 for his theory to be completely disproved, when NASA’s Mariner 4 spacecraft sent back the first images of the planet during its flyby. Modern astronomers have recently tried to work out what Lowell actually saw when he perceived the canals. Some have concluded that he may have set up his telescope incorrectly and what he was actually seeing was not canals, but rather ‘reflections of the blood vessels in his own eyes’ (Stuart: 2018, p.142). It was, therefore, more a case of Lowell seeing what he wanted to see, rather than what was actually there!

Magdalen’s copy of this text – one of only three copies in the university – was donated to the library by Elizabeth Chapman, the widow of Edward Chapman (1839-1906). Chapman had been a Fellow since 1882 and a Conservative party politician. It is not known why the book was donated to the library, but the fact that Edward’s first degree was in Natural Sciences may explain his interest in astronomy.

Despite its inaccuracies, the Magdalen copy of this text is a fascinating introduction to the history of Martian exploration, revealing early ideas around the Red Planet’s geology, climate, and potential biology. Lowell would no doubt be fascinated by the current missions to the planet and the wealth of information they will transmit back to Earth. As talk once again moves towards possible human missions to Mars in upcoming decades, his enduring hope of some form of life on the planet’s surface may be realised. His canals, though, may never be built…

Launius, R. (2018). The history of space exploration: Discoveries from the ancient world to the extraterrestrial future. London: Thames & Hudson.