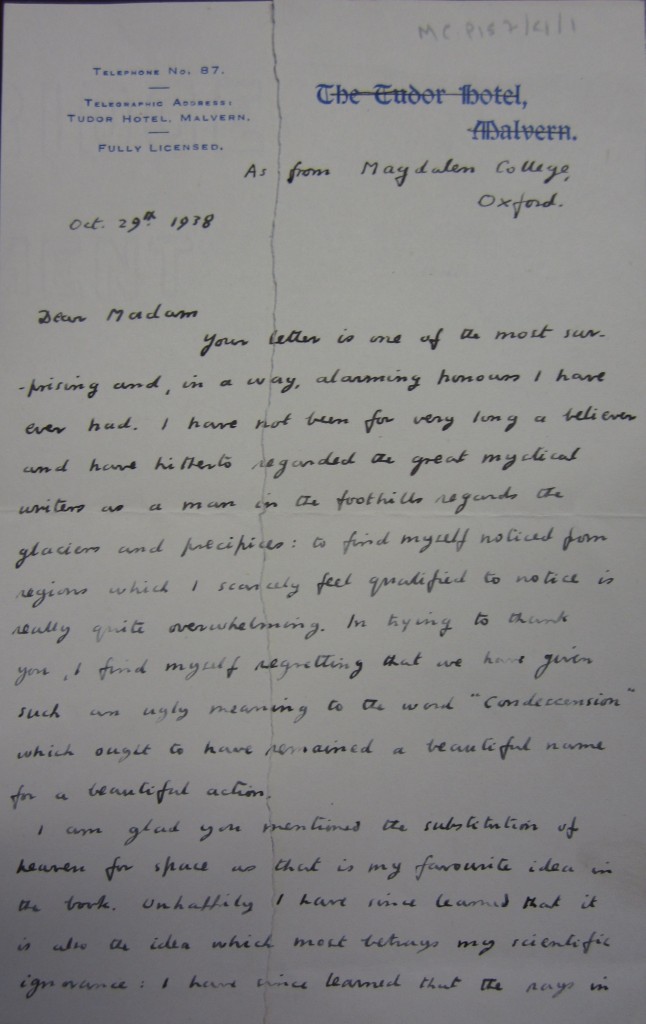 It was while he was at Magdalen that Lewis rediscovered his Christian faith, and wrote many of the books which established his reputation, be it as an English scholar (The Allegory of Love), a novelist (his Narnia books), or a theologian (most notably with The Screwtape Letters and Mere Christianity). In the midst of all this writing, however, Lewis also taught English to a great many students, both at Magdalen and at other Colleges.

We show here an image of Lewis from a group photograph of the Fellows of Magdalen taken in 1928, shortly after his arrival in the College.

The College holds only a few of Lewis’s papers, but among them is this delightful letter from Lewis to the mystic Evelyn Underhill, dating from 1938. She wrote to Lewis to express her pleasure at his space travel novel Out of the Silent Planet. Lewis’s reply reveals his own pleasure at receiving praise from a writer whom he respected greatly. The letter is printed in full on pages 234–5 of Volume II of Walter Hooper’s edition of Lewis’s collected letters. It opens:

“Your letter is one of the most surprising and, in a way, alarming honours I have ever had. I have not been for very long a believer and have hitherto regarded all great mystical writers as a man in the foothills regards the glaciers and precipices: to find myself noticed from regions which I scarcely feel qualified to notice is really quite overwhelming.”

Lewis does not say a great deal about his time at Magdalen in his autobiography, Surprised by Joy, but there is more to be found, especially concerning his early years at Magdalen, in the following texts:

Some scholars have also wondered whether some of the episodes and characters set in the imaginary “Bracton College” in Lewis’s 1945 novel, That Hideous Strength, may owe something to some of his experiences at Magdalen.

The Lewis scholar Professor Joel Heck has created a detailed chronology of Lewis’s life, which will have more information about Lewis’s Magdalen years.