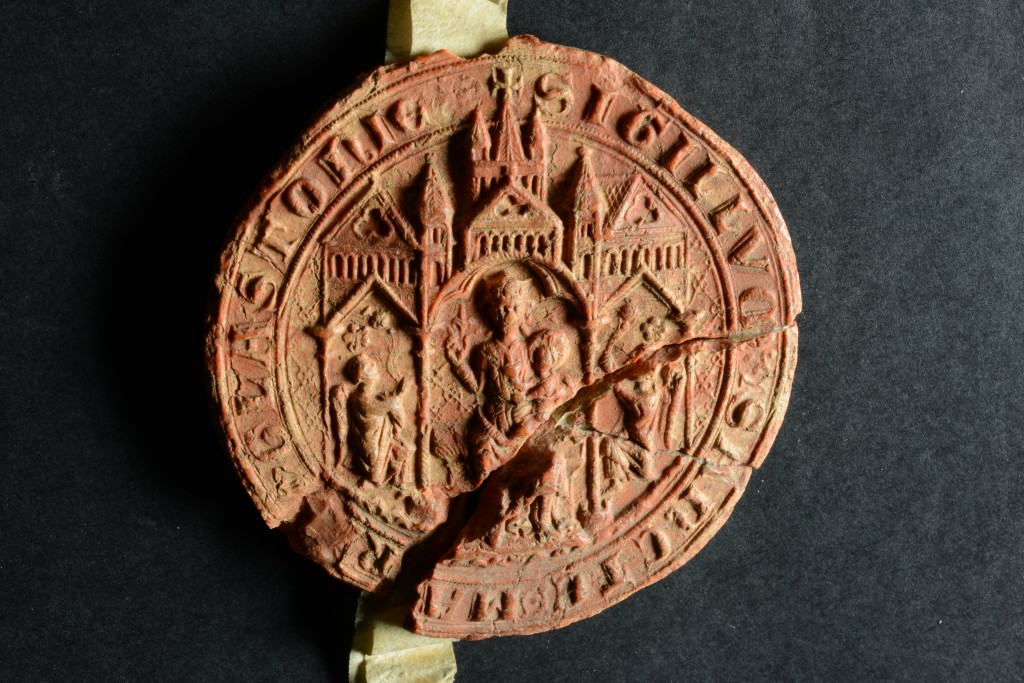 One of the pleasures of working in an archive is that you cannot possibly know everything about everything in your storerooms. This is not an admission of incompetence so much as simple inevitability: the medieval deeds which form only a part of our total holdings, for example, run to 12,000 items just by themselves.

The pleasure lies in the fact that archivists are constantly discovering intriguing new things about the stuff right under their noses. There is buried treasure everywhere, but no maps for most of it; no Xs to mark its location. So often, the significance of a particular item only becomes clear when a researcher unearths it. When they do, the surprise and delight is as much the archivists’ as theirs.

This was the case back in March, when a German historian called Dr Markus Späth visited the archives to conduct some research into medieval English seals. He had already been there for most of a day when he asked for one of our property deeds (Ref. Stainswick 68), witnessed and sealed in Somerset on 7 July 1277.

Fetching it involved a trip up the 15th-century Muniment Tower where all our medieval deeds are kept, still in the wooden boxes and cabinets which the college commissioned for them half a millennium ago. Dr Späth drew the document carefully from its acid-free paper envelope. There were two seals attached to it, one of them very large and detailed; impressive despite having split at some point in the past seven centuries into three separate pieces. Dr Späth examined the larger seal closely.

“I have been looking for this,” he said at length, “for nine years.” The big seal belonged to Glastonbury Abbey; more than that, it was the second earliest of the Abbey’s so-called common (in the sense of corporate) seals known to be in existence. Dr Späth had searched for it fruitlessly in the British Library, the National Archives, and in archives and museums across the continent.

The archivists took in the enormity of the discovery: we could have one of the only—maybe even the only—imprint of this magnificent seal still in existence. Then we looked at the seal itself, lying there in three separate pieces. At least the breaks were pretty clean. We looked at each other. “We should probably get that seen to,” we thought, slightly sheepishly. So the seal is now in the learned and dexterous hands of the Oxford Conservation Consortium, who are handily based just over the Deer Park in Grove Cottage. For his part, Dr Späth is now nearing the end of his research and is aiming to publish his findings this September.

The seal depicts the Virgin and Child flanked by a kneeling angel on either side, all beneath three decorative canopies known as tabernacle-work. Around the edge is written “Sigillum Sancte Marie Glastonie”—The Seal of Our Lady of Glastonbury.

The seal’s size and intricacy befits an institution as wealthy and powerful as Glastonbury Abbey. When the Saxons invaded Somerset in the 7th Century, there was already an abbey at Glastonbury; subsequent kings endowed it with more and more property, so that when Domesday Book was compiled in 1086, Glastonbury was the richest abbey in England. An enormous fire in 1184 destroyed many of its buildings and treasures, but by the time this seal was struck, Abbot John of Taunton was engaged in a large-scale programme of building to recapture the abbey’s magnificence. By the 14thCentury, Glastonbury’s wealth was second only to that of Westminster Abbey.

Glastonbury has long been connected with England’s mythic past. Glastonbury Tor was said to be the home of Avallach, lord of the underworld in Celtic legend. There is a story that the abbey itself was founded by Joseph of Arimathea, and that the thorn tree in its grounds grew from the staff he carried on his way there. Perhaps most famously, the monks at Glastonbury claimed in 1191 to have discovered the burial place of King Arthur and his queen Guinevere. In 1278, the year after this imprint was struck, King Edward I attended a stupendous ceremony at the Abbey to accompany Arthur’s reburial. Modern historians have mostly considered this to be a hoax dreamed up by the monks to attract pilgrims and, more importantly, donations which could be used to repair damage from the fire of 1184.

Whatever the authenticity of the legends surrounding Glastonbury Abbey, however, this seal has turned out to be a genuine archival treasure. Once it returns from Grove Cottage, I’ll be able to write an update to show you how our brilliant conservators have made it as safe as possible from the ravages of its next few centuries in existence.

The Oxford Conservation Consortium project to clean all 12,000 deeds is detailed here.