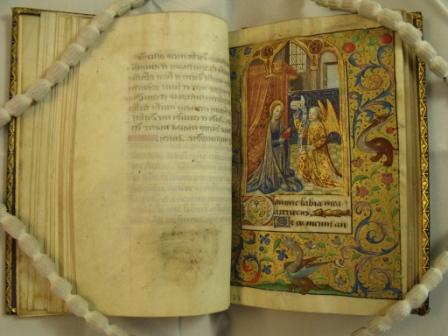 Some of the most richly decorated manuscripts to survive the Middle Ages are the so-called Books of Hours. These books contain a variety of texts—normally a calendar, listing saints’ days and other festivals; the Hours of the Virgin, a series of eight devotional texts designed to be read at set points through the day, a simplified version of the rituals performed in monasteries; the Office of the Dead, containing the full text of the service held for the dead; plus other offices, prayers to saints and the Virgin, and readings from the Gospels and the Psalms. Books of Hours were mainly produced for a lay audience and the text was never fully standardised, so the wording of the Hours, the saints mentioned in the calendars, and the prayers chosen can tell us much about the place of origin of a book and the preoccupations of the people commissioning it.

We have no evidence that Magdalen’s Old Library originally contained any Books of Hours. However, over the centuries several have been donated to us. These are illustrated below, wherever possible using the image from Matins, the start of the Hours of the Virgin, to show the differences that exist between manuscripts according to the wealth and taste of their commissioning patron and the skill of their artist.

The origin of a Book of Hours can often be traced by the precise wording of the text, and the saints chosen. For example, in this item the calendar includes several saints of Central France: Leobinus Bishop of Chartres (‘Lubin’, 14 March), Arnulf of Metz (‘Arnoul’, 18 July), and Lupus Bishop of Sens (‘Lou’, 1 Sept.). The wording of the Hours of the Virgin follows the Use of Chartres, the text commonly used in the area around Chartres, and thus we can assume that it originated there.

Unusually, in this Book of Hours the start of Matins is illustrated with a scene from the Garden of Gethsemane rather than one of the Annunciation. The other Hours are also accompanied by images from the Passion of Jesus rather than the more common Life of Mary.

The text follows the Use of Rome, the most common text for Hours of the Virgin, so doesn’t help us identify its origin. However, the choice of saints points to Flanders or the Franco-Flemish border, and the hand also points to Flanders. Interestingly, at the rear of the book there is a section in a different hand, which seems to have been created in Italy.

It was donated by John Riguard (1821–1888), a Magdalen student and later Fellow. The Archives hold some of his papers.

This Book of Hours follows the Use of Rome, and many of the Saints listed in it are from Italy, suggesting an Italian origin. It also has several female saints (including Claire and Ursula) and feminised versions of male saints (Benedicta, Francisca, and Domenica), which suggest that it was originally commissioned for a woman. Monastic saints are also favoured, with illuminations of Francis of Assisi, Dominic, and Anthony of Padua.

It was donated by Edward Harry William Meyerstein (1889–1952), an ex-Magdalen student who later worked in the Manuscript Room at the British Museum. Meyerstein also gave Magdalen College Library and Archives some of our most important 20th-century gifts, including: Magd. MS. 300, an early draft of Oscar Wilde’s Lady Windermere’s Fanentitled A Good Woman; Thomas Morley’s Plaine and Easie Introduction to Practicall Musicke (1597); and a large collection of imprints of the Aldine Press in Venice.

This is the Book of Hours that has been in Magdalen the longest. It is unfortunately a rather battered example, lacking many leaves, which makes following it difficult. Because of this the image above is the start of the Prayers to the Virgin rather than the start of Matins. The Hours of the Virgin seem to follow the Use of Sarum, a variant that originated in England but was very widespread (especially whilst the English ruled northern France). It is also without a calendar, making it even harder to locate, however the litany includes several saints that suggest an origin in northern France, perhaps specifically Normandy.

This Book of Hours was donated to Magdalen in the 17th century by “Guilielmi Wright aurifabri de civitate Oxon” (according to an inscription at the start of the book). It is not clear whether this is the William Wright who was an MP for Oxford in 1678–81 or his son with the same name who matriculated at Trinity in 1674. The college’s accounts also feature a goldsmith called Martin Wright between 1600 and 1654, who is presumably a relative. This suggests an interesting interlocking network between Magdalen and the artisans of Oxford, with the college paying a goldsmith for their work and then one of their relatives donating us a book (perhaps hoping to secure further work after their relative’s demise?)

Whilst we only own three original Books of Hours, we have been very lucky to receive on loan several facsimiles of particularly grand Books of Hours from a Magdalen alumnus, Michael McGowan (Magdalen 1982–1987). These facsimilies give our readers a rare chance to study these great manuscripts up close, something they are unlikely ever to be able to do with the originals.

The Très Riches Heures is possibly the most famous illuminated book in the world, particularly because of the scenes in the calendar. On folio 25 verso there is a vivid depiction of the story of Adam and Eve in the Garden of Eden, whilst on folio 26 recto there is a beautiful Annunciation for the opening of Matins. The arms displayed below the miniature of the Annuncation, supported by a bear and a swan, are those of the Duc de Berry, who originally commissioned the manuscript from the Limbourg brothers. Jean de Berry was the son, brother and uncle of three successive French kings, a hugely powerful figure and an avid collector of fine art and jewels.

The Belles Heures was, like the Très Riches Heures, commissioned by the Duke of Berry and made by the Limbourg brothers. In fact it was produced before the Très Riches Heures, and the Limbourg brothers were kept in employment by the Duc de Berry throughout, who also gave them an impressive house in Bourges and numerous gifts of gold. The inventories of the Duc de Berry record a collection of six beautiful Books of Hours, showing that this was a subject he was particularly interested in.

There is a whole blog dedicated to the Belles Heures here.

Our final facsimile Book of Hours is the Fitzwilliam Book of Hours. On folio 50 recto the traditional image of the Annunciation is joined by a historiated border with scenes from the Old Testament that were thought to prefigure the arrival of Jesus: Moses hearing the voice of God from the unconsumed burning bush, and God giving Moses the Tablets of the Law. In the same way, God spoke to Mary through the angel Gabriel, and then gave mankind his son, Jesus.