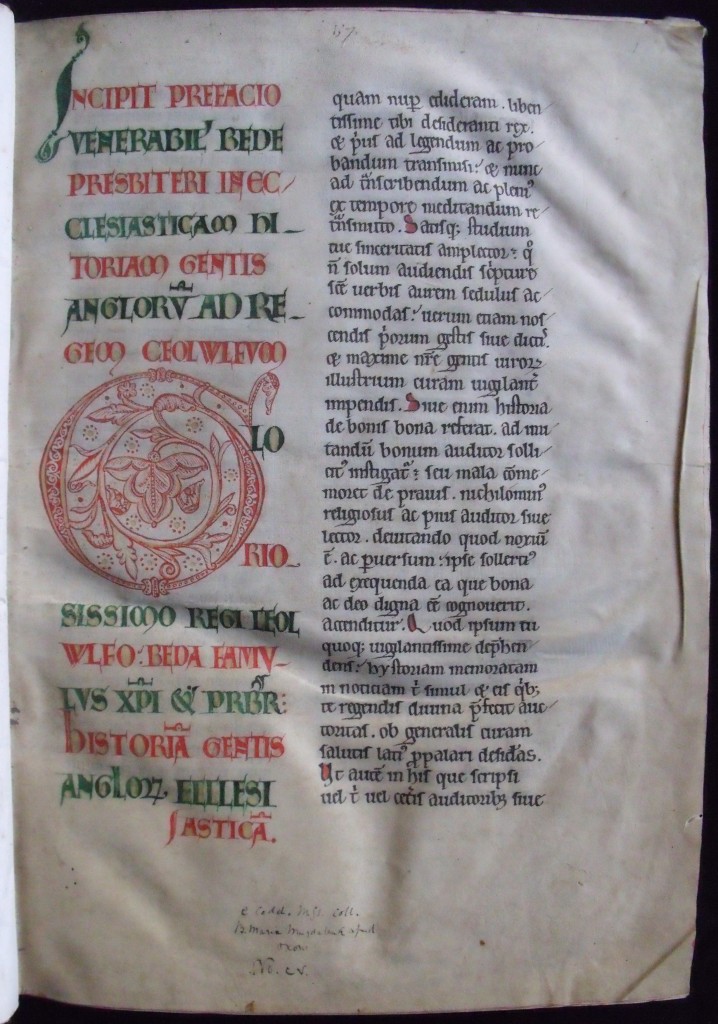 The Venerable Bede’s Historia Ecclesiastica Gentis Anglorum (Ecclesiastical History of the English People) is one of the most important books to have survived from Anglo-Saxon England. It contains a detailed history of the conversion of the Anglo-Saxons, from the initial mission of St Augustine in 597 to the time of Bede in the 8th century, dwelling particularly on the conversion of the kingdoms of the Heptarchy and the debates with the British Church about the correct date of Easter. Magdalen’s manuscript copy of this book, Magd. MS.Lat.105, dates to the mid-12th century, some 400 years after the text was originally written. The book seems to have received a boost in popularity at that time, as many surviving copies date from then.

Bede’s history was well-researched, the product of a monastery with an excellent library and with links to correspondents around England (particularly on the eastern side). His work pulls together all of these sources to create an overarching narrative, and preserves many bits of information not found in other surviving sources.

One such gem is the earliest surviving English poem: Cædmon’s hymn. According to Bede, Cædmon was an old lay herdsman at Whitby Abbey, who never learnt to sing and so would leave feasts once the singing had begun unless he was called to perform. One night, after he had left a feast, he was approached in his dreams by someone who told him to sing a song. At first he refused, but when he was asked again he sung this hymn.

Bede wrote his history in Latin, including translating Cædmon’s hymn from its original Old English into Latin. However, 21 surviving medieval copies contain an Old English version of the text: either because the whole book has been translated into Old English (as is the case for the so-called Alfredian text from Wessex) or because the hymn has been added in Old English. In Magd. MS.Lat.105, on folio 99 recto, the hymn in Latin is halfway down the left-hand column, whilst the hymn in Old English has been written in the right-hand margin, starting at the same height on the page. The start of both versions are marked by three dots as a signe-de-renvoi (sign of return).

Interestingly, the Old English poem seems to have been copied out by the scribe writing the rest of the text, but in a deliberately different style of hand, blending protogothic bookhand, in which the rest of the book is written, with older insular minuscule features. Note that it uses three letters from the Old English alphabet that no longer survive: wynn (ƿ, used extensively including at the start of the 2nd word) to represent a ‘w’ sound; thorn (þ, in the 3rd line) to represent a ‘th’ sound; and aesc (æ, used fairly frequently including in the 4th line and as Æ in the 10th line) for a sound between ‘a’ and ‘e’. It also uses the Tironian nota ⁊ (in line 3, looking more like a ‘y’) to mean ‘and’. The mixture of protogothic bookhand and insular miniscule can be clearly seen as it mixes several different forms of some letters, such as ‘g’ (compare the 3rd, 5th, and 8th lines), ‘d’ (compare the rounded ascender in the 2nd line with the straight one in the 3rd line), and ‘r’ (in a short form in the first four lines but with a descender in the 5th line).

All of the 21 surviving copies of this hymn are subtly different, but they can be grouped into a number of distinct recensions, with two groups believed to be Northumbrian whilst two or three others are from Wessex. The precise connections between the groups are much debated, but all scholars agree that Magdalen’s manuscript is from the West Saxon ylda group of 6 or 7 surviving versions, dating to the 11th or 12th centuries or later.

There are many books that discuss Bede and Cædmon. Two books dedicated to analysing the text of Cædmon’s Hymn and the relationship between the surviving versions are:
Elliott van Kirk Dobbie, The manuscripts of Cædmon’s Hymn and Bede’s Death Song (New York: Columbia University Press, 1937)
Daniel Paul O’Donnell, Cædemon’s Hymn (Cambridge: D.S. Brewer, 2005)