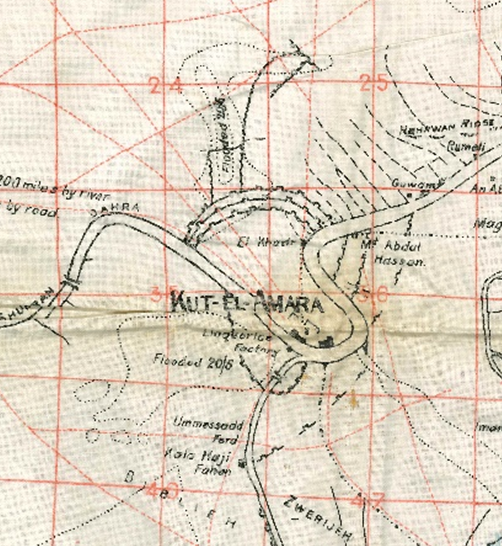 As I continue to explore the Jeremy Wilson archive of TE Lawrence research, I never know what I am going to find. Sometimes, delving into another humble-looking box reveals some fascinating historical material.

Before Christmas, I found this beautiful and detailed map showing a stretch of the Tigris river from Kut-el-Amara to Sheikh Saad, then part of the Ottoman Empire and now in modern Iraq. The map is dated 1915 and is printed directly onto linen. I was immediately intrigued. Was this an original map used by soldiers in the First World War?

My initial thought was the map had something to do with the Siege of Kut which lasted from November 1915 to April 1916, one of the most significant defeats for the British Army in the Middle East during World War One. Spurred by imperial ambitions to occupy Mesopotamia, a division of the Army marched up the Tigris river to attempt to take Baghdad, but were beaten back by Turkish forces and isolated in the town of Kut with diminishing food supplies.

In 1916, TE Lawrence was sent from the Arab Bureau in Cairo to Mesopotamia to buy the freedom of British and Indian prisoners trapped in Kut. However, it was a disaster. Lawrence and his fellow negotiators attempted to offer up to 3 million pounds to the Turkish forces to buy the freedom of these prisoners, without knowing the fact that the leaders at Kut had already surrendered. According to Jeremy Wilson’s figures, only 1136 injured prisoners were released and around 12000 troops were taken prisoner, mostly from India. Wilson notes that only a quarter of these already exhausted and weakened prisoners returned. The siege had resulted in the deaths of thousands of troops from India and Britain, as well as Turkish soldiers. Wilson writes that Lawrence was extremely critical of the events at Kut and the cost in lives of imperialist ambition.

Consultation with map experts at the Bodleian Library revealed that the linen map was made for the Mesopotamian Expeditionary Force, as part of attempts to map Iraq with a view to acquiring it for the British Empire. The map is labelled TC 41 15.5.1915 and was made for the Tigris Corps. These linen maps are incredibly rare, because there were only small print runs and for the practical reason that most of them would have been used on the ground by such different groups as troops, archaeologists, colonialists and oil prospectors. There are only a few examples in collections, held by the Bodleian and the British Libraries.

The Mesopotamian Expeditionary Force maps typically contain a high level of archaeological and geographical detail. The map in the Wilson collection has some intriguing details, such as sites labelled Sodom and Gomorrah near the river Tigris on the right of the sheet. The meaning of this is unclear as it is generally thought that these Biblical cities were located near to the Dead Sea in modern-day Israel. The map also shows Roman roads and the location of forts.

As well as detailing the cradle of civilizations, it also shows details relevant to a twentieth-century army such as the location of ‘Arab villages’ and water features such as canals, wells and areas prone to flooding and disease. For example, there is a ‘Cholera Creek’ marked south of the river. The maps were, at the same time, highly practical guides and historical records.

So what did this map have to do specifically with the Siege of Kut and TE Lawrence?

Turning to Wilson’s biography I found that part of the reason that the British Army could not relieve the sieged troops was that the valley was significantly flooded in Spring 1916. The map was originally dated 15 May 1915 but areas of flooded and dry land marked June 1916 and 20/6 are marked on the map, so the landscape looks likely to have been updated after the Siege. This would make it a significant document made for the attempted British campaign to take Baghdad, but which came to reflect the consequences of a disaster.

Wilson notes that the reason TE was sent to Kut was partly because he had been working in the Map Division at Cairo and had been helping the Royal Flying Corps with aerial photography for the purposes of producing more detailed maps. Gertrude Bell, the archaeologist and Liaison Officer in Basra, heard about this new technique and told the Mesopotamian Intelligence Department who were keen to implement it in their maps. Indeed, according to Wilson, after attempting to negotiate the surrender, Lawrence returned to their base at Basra and gave advice on aerial photography. Therefore, this map could have been improved using Lawrence’s expertise, as it was clearly updated after the Siege of Kut.

Another interesting point is that the map details the location of a ‘liquorice factory’ to the south of the town, within the fortified walls. This factory was destroyed in the aftermath of the Siege, as documented by the Imperial War Museum.

The map still leaves many questions to be answered. Who owned it after the First World War? What did they use it for? And how did Jeremy Wilson acquire it? The answers may still lie in the labyrinthine depths of the Wilson collection. In any case, the map is a telling artefact showing how Britain used archaeology and geographical survey for Empire-building purposes in the early twentieth century. It is also the portrait of a tragedy.

Thanks to Debbie Hall, Senior Library Assistant at the Bodleian Library Map Room