Home » An Historical Account of the Late Great Frost 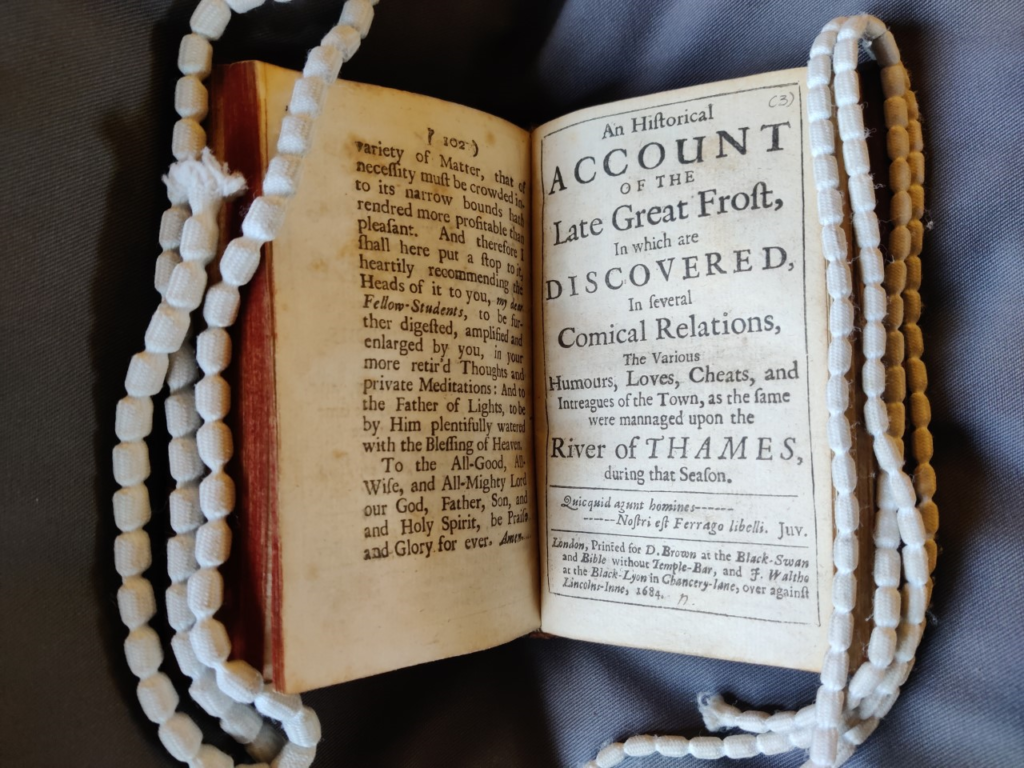 As we are still in the depths of winter, this month’s Illuminating Magdalen post focuses on a very frosty pamphlet from the Old Library collections. This pamphlet, printed in London in 1684, draws the eye in right from the first page with this delightfully worded title:

It definitely makes you want to read more! The ‘Great Frost’ of the title refers to the freezing of the River Thames in the winter of 1683-84. Although unheard of in the modern era, the river has a long history of freezing, with harsh winters especially common between the 17th and early 19th centuries – a period known as the ‘Little Ice Age’. As Fagan (2002) points out, during this period all ‘Europe experienced a cycle of bitterly cold winters, mountain glaciers in the Swiss Alps were lower than in recorded memory, and pack ice surrounded Iceland for much of the year’ (xii).

The winter of 1683-84 in London definitely matched this pattern of cold weather. In fact, the severest frost ever recorded in England took place in this year, with the Thames completely frozen for seven weeks in London (Manley, 2011: p.134). Although exact temperatures were not recorded in the 17th century, the records of Dr John Downes (1627-1694), a physician at Christ’s Hospital, reveal temperatures in the region of -4°C indoors and a very chilly -12°C outdoors! (Manley, 2011: p.134)

In such cold winters when the Thames froze, it was common for a ‘Frost Fair’ to be held on the ice and 1684 was no exception. Such fairs were a huge spectacle and the whole city would expand onto the ice. Due to the extent of the ice and its longevity in this year, the ‘Great Frost’ created an equally great fair. In this pamphlet, the fair is described in great detail (see picture below), with the author highlighting that several goods were sold and many activities moved onto the ice, ranging from football and bowling to bear-baiting. Naturally, sledging was also a popular activity, with the author writing that they were improvised from several different devices, such as ‘seates’, ‘chaires’, and the intriguingly named ‘carrow-whimbles’.

Indeed, the thickness of the ice meant that unexpected activities could be moved onto the river. At the bottom of the picture above, the author writes that ‘smoaking fires’ were placed directly onto the ice! Likewise, Clout (1991) reveals that an entire printing press – by no means a light object – was set up directly on the frozen river (p.13). During these seven weeks of bitter cold, it seems that the entire city moved onto the ice! This hustle and bustle can be gleamed from the depiction below:

This pamphlet may be small and unassuming, but it remains an intriguing item in the Old Library’s extensive collection. It provides a contemporary eyewitness account directly to the past, revealing an intriguing event in the history of London. Frost fairs may have disappeared from the modern capital, but pamphlets such as this one let us imagine what visiting one would be like!

Sutherland, B. (2012). Frost fair on the frozen Thames [Image]. Retrieved from https://tinyurl.com/y5ch7ecy