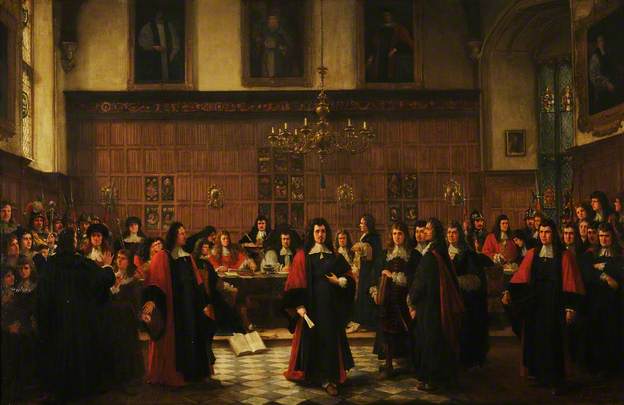 In March 1687, the President of Magdalen College, Henry Clerke, died. This was an ominous time for a vacancy: the then King of Britain, James II, was a Catholic, and he had been installing heads in other Oxbridge Colleges who were either Catholic or obedient to his views. The Fellows quickly elected one of their own number, John Hough, as President, but James promptly came up with a nominee of his own. The Fellows refused to accept  him, and in August James offered a second nominee, namely Samuel Parker, the then Bishop of Oxford.

The Fellows refused to accept Parker, declaring that they already had a President in John Hough. James was furious; in September, when he visited Oxford, he summoned the Fellows of Magdalen to Christ Church and gave them a furious tongue-lashing. In October he then sent a commission to Magdalen.

This time, the Fellows, accepting defeat, agreed to accept Parker as President “so far as is lawful and agreeable to the Statutes”. James should have been content with this outcome, but he was not: he now insisted that the Fellows formally apologise  for their actions. This was too much: on 16 November 25 Fellows refused to make this submission, and were all expelled from the College. In January, 17 Demies were also expelled. Only three Fellows chose to submit.

James himself arranged the appointment of new Fellows, mostly Roman Catholics, and in March 1688, when Samuel Parker died, he appointed a Catholic President, Bonaventure Giffard. Giffard, who had been awarded a Doctorate in Divinity from the University of Paris, possessed both scholarly distinction and integrity of character, but he was still a Roman Catholic. The College owns this portrait of him, by James Russell.

Meanwhile, many in Britain stood aghast at James’s infringement of the autonomy of the Fellows and Demies of Magdalen College, and it was quickly seized upon as another example of what was claimed to be his autocratic rule.

By the autumn of 1688, however, even James was aware that support for him was weakening, and he began to undo some of his more unpopular acts. In particular, he invited Peter Mews, the Bishop of Winchester and official Visitor of Magdalen, to make a fresh visitation of the College. Mews now formally expelled all the intruded Fellows, so that all the expelled Fellows, with John Hough, now their formally recognised President, were restored to their posts on 25 October 1688, and it is this restoration which the College observes every year.

The College has this fine portrait of Peter Mews, painted by Michael Dahl.

The College’s archives have an eloquent witness to these confused times in the shape of its Buttery Book for 1687–9. Buttery Books are among the humblest and least attractive of all College archives: they merely record members’ weekly expenditure in the buttery. Yet, when read correctly, they are extremely important,  because they show, better than any other record, exactly who was in the College in any given period.

Here is a typical opening in the Buttery book, from the summer of 1687.

All the members of the College are grouped by their status as Fellow, Demy or Commoner, and then listed in order of seniority. Their weekly bills are listed in the left hand margin.

The pages recording the expulsion of the Fellows of Magdalen are lost, but we do have this remarkable page from the week beginning 20 October.

Here you can see that someone has crossed out all the names of the intruded Fellows and Demies, clearly on Peter Mews’s orders. No more graphic illustration could be given of the suddenness of this transformation in the membership of the College.

The College has found various ways down the years to celebrate these tumultuous events. In 1884, in time for the 200th anniversary of the expulsion, the Governing Body of Magdalen commissioned Joseph Tonneau to paint a depiction of the event.

Every effort was made to get it just right, with Magdalen’s great antiquarian, John Bloxam, on hand to supply advice on the right academic dress or locating portraits of the chief characters. However, in one important respect Tonneau would not let the facts get in the way of his art: he painted the scene of the expulsion taking place in the Hall, whereas it would actually have taken place in the Senior Common Room – but this would have made for a less arresting picture.